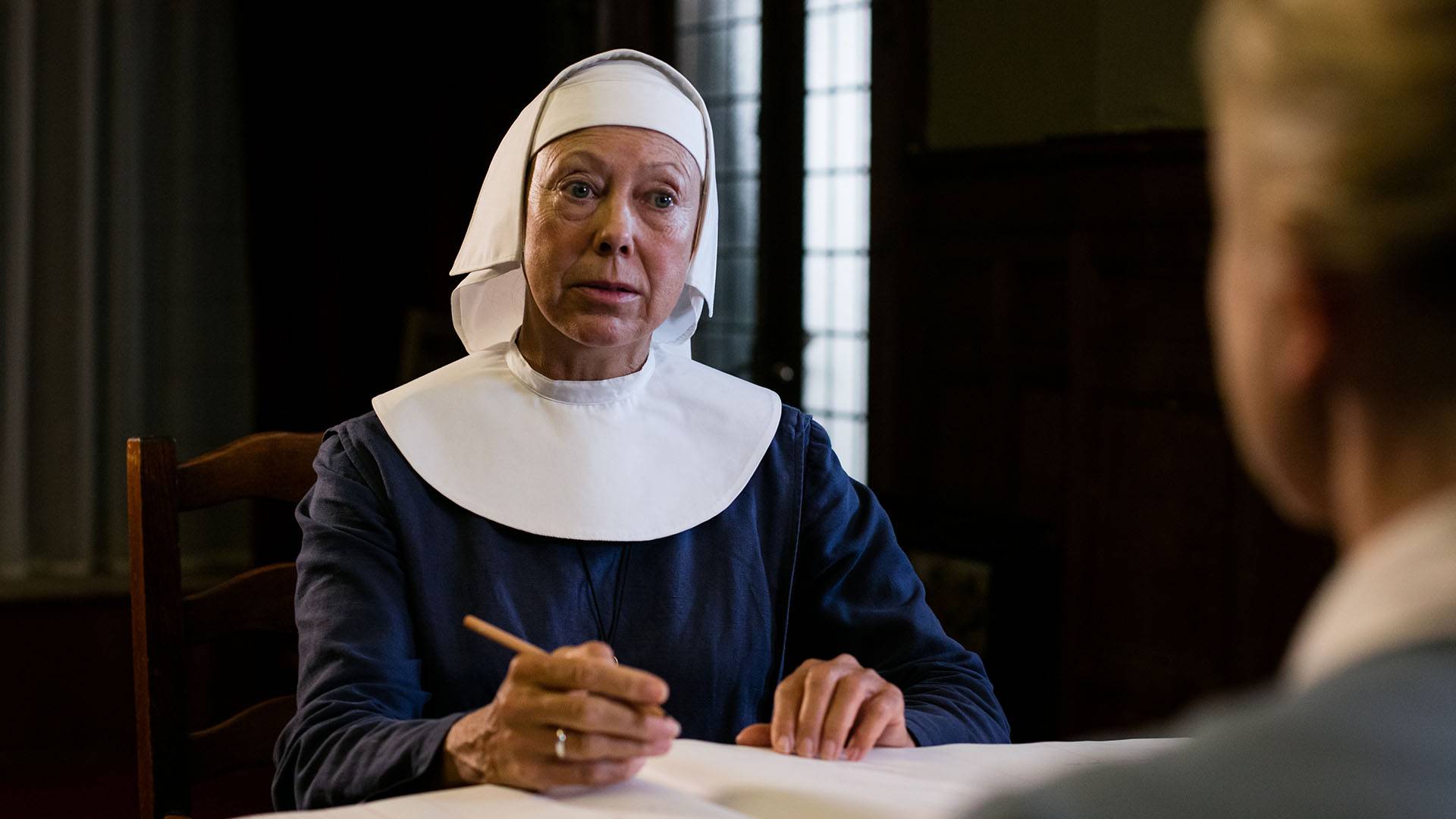 Sister Julienne in a scene from Season 6.

Deborah McBain reflects on the personality traits and decisions that turn a Modern Midwife into a strong leader.

Each life is a journey defined by the turns we take and the roads we choose, as the narrator says at this episode’s beginning. It is daunting to me to consider the myriad of decisions that has brought each of us to our present place. I consider that it is not just my decisions but also the decisions of others that brought them into my life’s path and wonder if it is indeed fate or random chaos. I am thinking of my friend, colleague and most recent “supervisor”, Cathy Collins-Fulea.

Cathy is the dynamic leader of Henry Ford Health System’s Midwifery Service. She is also an influential leader in the midwifery profession at large, having served in the American College of Nurse Midwifery in several roles including regional representative and most recently as vice-president. She has traveled throughout the United States speaking as an expert on a midwifery model of care that has nurse-midwives taking on an active role in teaching medical students and residents as the experts in normal labor and birth. I had a chance to chat with Cathy recently at a social gathering with several midwife friends and was anxious to ask her what led her to the road of midwifery.

As a Canadian citizen and young woman right out of high school, Cathy had an opportunity to get her nursing education in England in the late 1970s, which included her midwifery training. Although she knew little about midwifery, apparently it seemed the brightest, straightest option and once she started down that road she found she enjoyed the journey. When she returned in 1980 to her home in Ontario, she secured a nursing position across the river in a Detroit metro area hospital labor and delivery unit.

The Obstetrical care she witnessed in the United States was nothing like what she had learned during her Midwifery training at the Plymouth School in England. She was appalled by the ignorance and medical mismanagement of normal birth and with her midwifery knowledge, was confident in her ability to implement improvement. She made it clear that she was not called to midwifery to save women. Her vision was much bigger. Her calling was to improve health care and make midwifery the standard of care for normal birth.

She completed the requisites to become credentialed as a Certified Nurse-midwife in the U.S. and in 1983 started the 2nd hospital based nurse-midwifery practice in Michigan at Sinai-Grace Hospital. When opportunity presented itself several years later in the Henry Ford Health System, Cathy planted herself and her practice partners in that fertile soil to grow into one of the largest and most consolidated midwifery practices in the country. The alliance with the medical team is so complete that most Henry Ford Labor and Delivery staff from nursing to medicine cannot imagine functioning without the midwives.

I met Cathy in 1994 as a midwifery student. I was grateful and honored that she and her practice had agreed to precept me through my clinical midwifery training. Through the years, I have intermittently been intimidated, awed, touched, humbled and empowered in the presence of this amazingly gifted woman. Although she and I share many of the same philosophies, we come from very different perspectives and I like to think we have been mutually enriched by this diversity of views.

Cathy understands the strength of diversity. Any time we needed to hire new staff for a vacated midwifery position each one of us had a say in which candidates we thought would complement, strengthen and fit best into the practice. She was always open to all views. I saw her learn and change over the years under her charge.

Now I am retired and she is no longer my boss but continues to be my friend. She continues to lead; modeling strength, courage and skill for the next generation of nurse-midwives. Her strength as an administrator is in her ability to find common ground and mutual motivation with those in power to move her agenda forward. She also unwaveringly supports her midwifery partners.

She has had to negotiate many changes over the years as clinic schedules became more crowded and demands on the midwifery staff grew, just as we are seeing with the midwives of Nonnatus House. She skillfully and empathetically adjusts clinic and hospital coverage schedules to accommodate her staffs health and family issues. Any unexpected birth outcomes will find her carefully supporting and counseling the grief stricken midwife unfortunate enough to be involved. She routinely relegates the development of the monthly schedule to another midwife staff member. She says she doesn’t have the time and patience to be “fair” with the schedule, which is certainly a fair and savvy move.

It is not in my nature to be an administrator so I especially respect Cathy’s skills. I am  grateful that she found her way to midwifery and we crossed paths along the way.

This episode’s epilogue points out …” there is no map for the road we find ourselves on…. We are all traveling through each other’s countries.  It is no matter if we meet as strangers, we can join forces…” Cathy had no map. She ventured forward with courage and confidence joining forces where and with whom she could. Modern day midwifery and health care is all the better for it.