Baby by Choice, Not by Chance 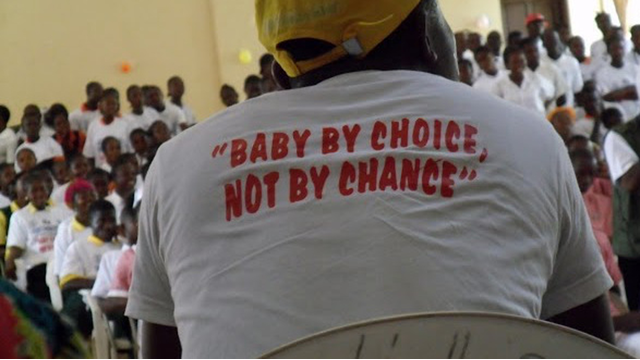 During my time in Liberia, we stayed in the house of a doctor that was rented out to the organization Africare. There were wonderful members of the Africare staff that were busy working at the house while we were there. We noticed one day that many of them had t-shirts that stated “Baby by Choice, Not by Chance” on the back. We found out that there was a county Contraceptive Day taking place on our last weekend there, and we were so excited to attend! There was even a Contraceptive Day Fair being held after the program, where women could get condoms, birth control pills, “the shot” (Depo-Provera) or a birth control implant that very same afternoon. 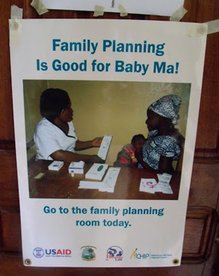 One of our projects in Liberia was using educational picture cards to teach about family planning to women in the villages and in the hospital’s postpartum ward. We used a template from the American College of Nurse Midwives Department of Global Outreach for these lessons, called "Home Based Life-Saving Skills". We had picture cards, would tell a story and involve the women in our group with coming up with suggestions for the women in the story to improve their outcomes. One of the stories we talked about involved a picture card of a pregnant woman, looking tired, with many small children. We talked about how the woman was getting pregnant and having her babies very close together. The woman had a hard time taking care of all of her children. This story sounded a lot like Nora’s story on this week’s episode. We talked about all the options women had in Liberia for family planning, which surprisingly, are very much like what we have available in the United States! We discussed taboos or barriers to using contraception, and one concern was that the husbands often did not want their wife to use contraception. The nursing students at Phebe Hospital helped us with the language barrier, and the women in the postpartum unit became very vocal and involved! It was great to see them asking questions and offering up information that they already knew. We worked to empower those women to make them feel like they could really take control of their fertility if they chose to, and I’m very glad that there are safe, reliable methods of contraception available for many women. I wish we could add “affordable” to that list; while many contraceptive methods are covered by insurance under the Affordable Care Act, this does not always help the uninsured and underinsured.

This episode of Call the Midwife brought me to tears. It reminded me again and again that no matter what I believe, or what I think is the “right” thing to do, that I cannot make decisions for someone else. It can be very easy to say that we would make a certain decision if we were in that person’s place, but truly, we don’t know how it feels to be in that situation. The hypothetical is never the same as the reality. Even if it is our reality, that doesn’t mean we feel the same or act the same as someone else with a similar situation. It was heartbreaking to watch Nora struggle with her pregnancy, and to see her desperation. I was amazed by the compassionate care provided by Sister Julienne. She modeled true midwifery care by pushing aside whatever beliefs she may have had (she is a nun, after all), and putting the patient’s needs first. I will continually look to the example of Sister Julienne to remind myself to always be kind, compassionate and understanding in my practice as a midwife.

Andrea Stadnicar (MS, RN, CNM) is a nurse-midwife who graduated in 2012 from the University of Michigan Nurse Midwifery program. Before becoming a midwife, she worked as a nurse in the emergency department and also in labor and delivery. Andrea currently works as a full-scope midwife with the Providence Nurse Midwives part-time.
Read More About Andrea |  Read All Posts by Andrea