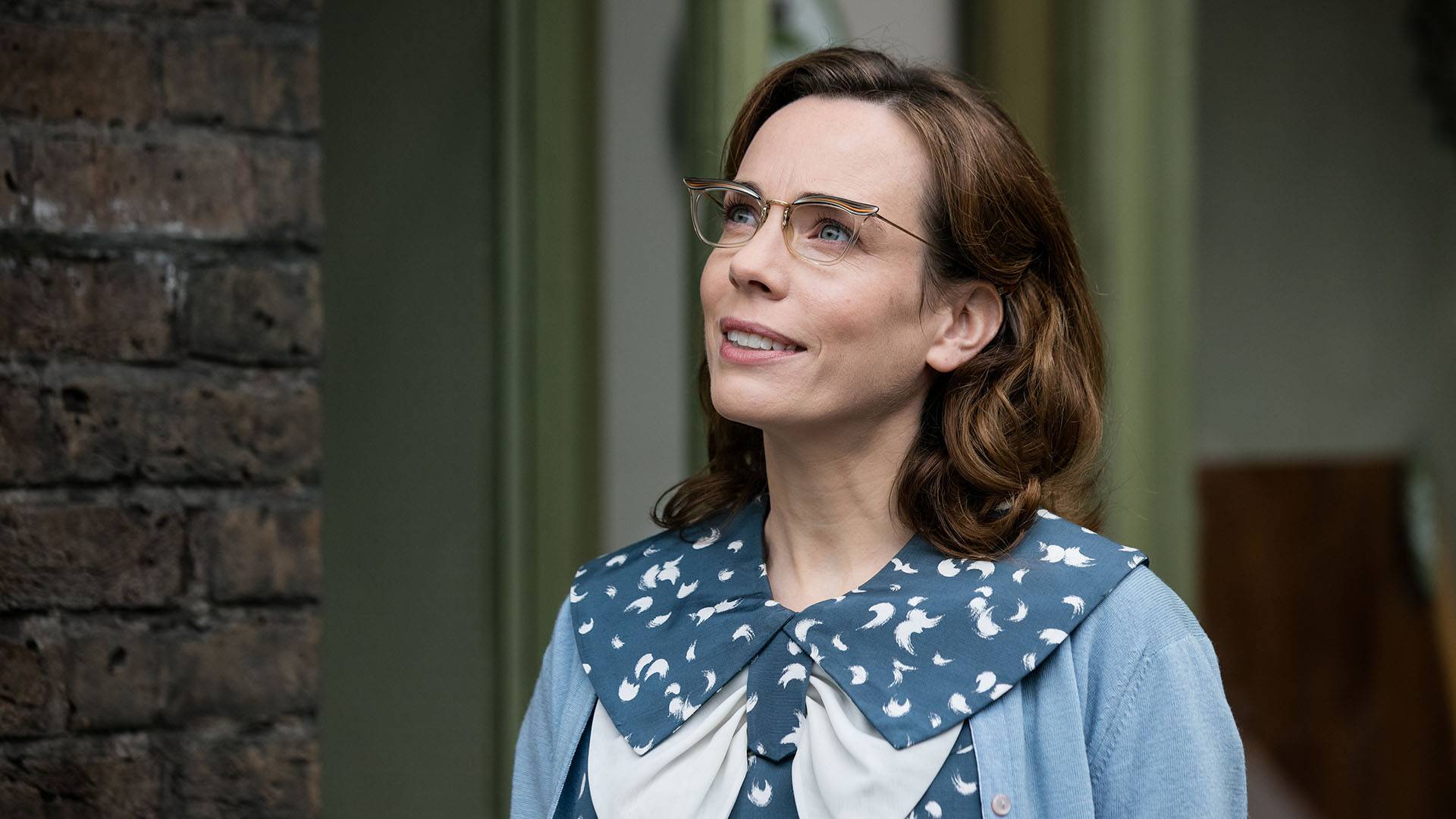 Catch up on Episode 5 of Call the Midwife. Warning: Spoilers ahead.

As the midwives take some time to recover from birthing and diaper changing, gentle giant and handyman of Nonnatus House, Fred Buckle, takes the spotlight. This week, Fred takes on the unexpected role of caretaker and gets a small glimpse into the day-to-day of our ladies in blue. Meanwhile, the Nonnatus House family welcomes Valerie Dyer, a handsome stranger pays a visit to the Nonnatans, and we revisit an old friend. Grab your bike and let’s ride into Episode 5.

Though we rarely get the chance to walk around in Fred’s shoes, we step into his life this week as Call the Midwife introduces us to Reggie, a young man with Down syndrome. The son of local dressmaker Ivy Jackson, Reggie is dependent on his mother due to his learning disability. He follows a strict routine each day, oftentimes waiting at home by himself while Ivy goes about her errands.

2. Bonding with the Gals

Back home, Valerie has finally joined the lady gang of Nonnatus House. Like any enthusiastic new employee, who has no idea what she’s getting herself into, she’s already charged full speed ahead into her work. Unlike those before her (#throwback to Chummy and Jenny), Valerie has a relatively easy transition into her job, unafraid of the challenges that Poplar presents, and brings a positive attitude to a house that always seems to need some uplifting. If the woman can pull through an explosion that caused one of her patrons to go blind à la Episode 2, what can’t she do? Oh yes, and let’s not forget that she has already come prepared with snacks for her first-ever midwife cocktail party, and we all know that any sort of food offering marks your acceptance into the Nonnatan circle.

While the midwives use this lull in their schedules to welcome Valerie, Fred is on the opposite side of town wrapping his head around a sudden loss when Ivy collapses at church. As the only connection Reggie has in the area, Fred is forced to break the news to him, and upon arriving at his house, discovers that Reggie has been patiently waiting for his mother to come home. Expecting Ivy to return when the big hand of the clock points to six and the little hand at 12 — a family tradition to help him with his schedule — Reggie doesn’t initially comprehend the gravity of the situation until he learns that he’ll be moving in with Fred and Violet.

At this point, Valerie has already found her place in the house, befriending the majority of her comrades early on. Little does she know, however, she’s already had a close friend in one Nonnatan since the day she was born. After returning home one night, she runs into Sister Monica Joan, who reveals that she and Sister Evangelina were the midwives who delivered Valerie as an infant.

This week, Shelagh returns home after an emotionally and physically draining stay at the hospital. All is well at the Turner household after the family receives the happy news that Shelagh hasn’t miscarried, and the family now considers how to approach the future with a family that will soon outgrow the house they live in. Though Shelagh and Timothy are both on board, Dr. Turner isn’t fully convinced that a move is necessary, leading to a little snark from teenage Timothy (they grow up so fast!). Why don’t you loosen those purse strings a bit, eh doctor?

When Nonnatus House introduces dental hygiene classes to the women and children of Poplar, we see a new character enter the building. Mr. Dockerill, aka YOWZA, swoops in with his good looks to assist the midwives. Trixie, seemingly unaffected by his jawline, seeks Mr. Dockerill’s help with her patient, Crystal, who fears the dentist’s office. The two work together to convince Crystal that she needs an operation to prevent her gum infection from getting any worse, and she reluctantly agrees to the procedure. Of course, we wouldn’t be surprised if Mr. Dockerill staring deep into her soul with those eyes had something to do with it.

Caring for Reggie doesn’t go as planned. Hoping to follow Ivy’s successful daily routine, Fred and Violet head off to work, leaving Reggie at home alone. However, in an attempt to cook for himself in an unfamiliar setting, Reggie turns on the gas to the stove at the Buckle’s house, which doesn’t light, and leaves it on as he walks outside to retrieve a package. In doing so, he locks himself out and wanders through the streets of Poplar to his old home while Fred returns to his gas-filled apartment. Fred eventually tracks Reggie down but the incident plays out as an important lesson for the the Buckles, who don’t know how to properly raise someone with special needs.

Though the process takes time, Reggie, Fred and Violet slowly adjust to their new life together. However, knowing that Reggie can’t stay with them forever, Fred makes a trip to The Linchmere hospital where a spot has opened up to house him. Sister Monica Joan accompanies Fred after forming a close bond with Reggie because she’s skeptical that the hospital, which she notes is for sick people, would be a suitable place for him to reside.

As it turns out, Sister Monica Joan was not wrong. The pair take off to The Linchmere where they meet Sister Ramsey, who has a “One Flew Over the Cuckoo’s Nest” vibe going on, to take a tour of the facility. The all-male ward that they visit is both dark and isolating, and it’s clear that both Sister Monica Joan and Fred are on the same page in their disapproval of the hospital. Before their departure, however, Sister Monica Joan recognizes a familiar face in the hallway and follows the woman through the hospital with Fred in hot pursuit. The two end up at a small room where they discover Sister Mary Cynthia in a deteriorated state. Distraught, they take the news to Sister Julienne who later visits the hospital to plead for Sister Mary Cynthia’s release. Unfortunately, Sister Ramsey refuses to release Sister Mary Cynthia into the Nonnatans’ care.

Elsewhere, with a little laughing gas and some gnarly tooth-pulling, Crystal successfully makes it through her operation. Not long after, she goes into labor at Mr. Dockerill’s office — because you might as well kill two birds with one stone — where Trixie and Mr. Dockerill once again team up to deliver her child. Later, Crystal receives a beautiful set of dentures and goes home with a fancy new smile and a fancy new baby. Since faux teeth and pregnancy are super romantic, Mr. Dockerill requests a dinner date with Trixie and she ultimately falls for his charm.

We’re off indeed as happy times lie ahead for our midwives. As the episode concludes, positive change is in the air. At Nonnatus House, a curious Sister Winifred learns how to drive with some coaching from Nurse Crane, the Turners buy their first house together, and Reggie finds a new home at Glasshouse Village Trust, a community for those with learning disabilities. Though the midwives are still working to help Sister Mary Cynthia, it seems that things are finally starting to look up.