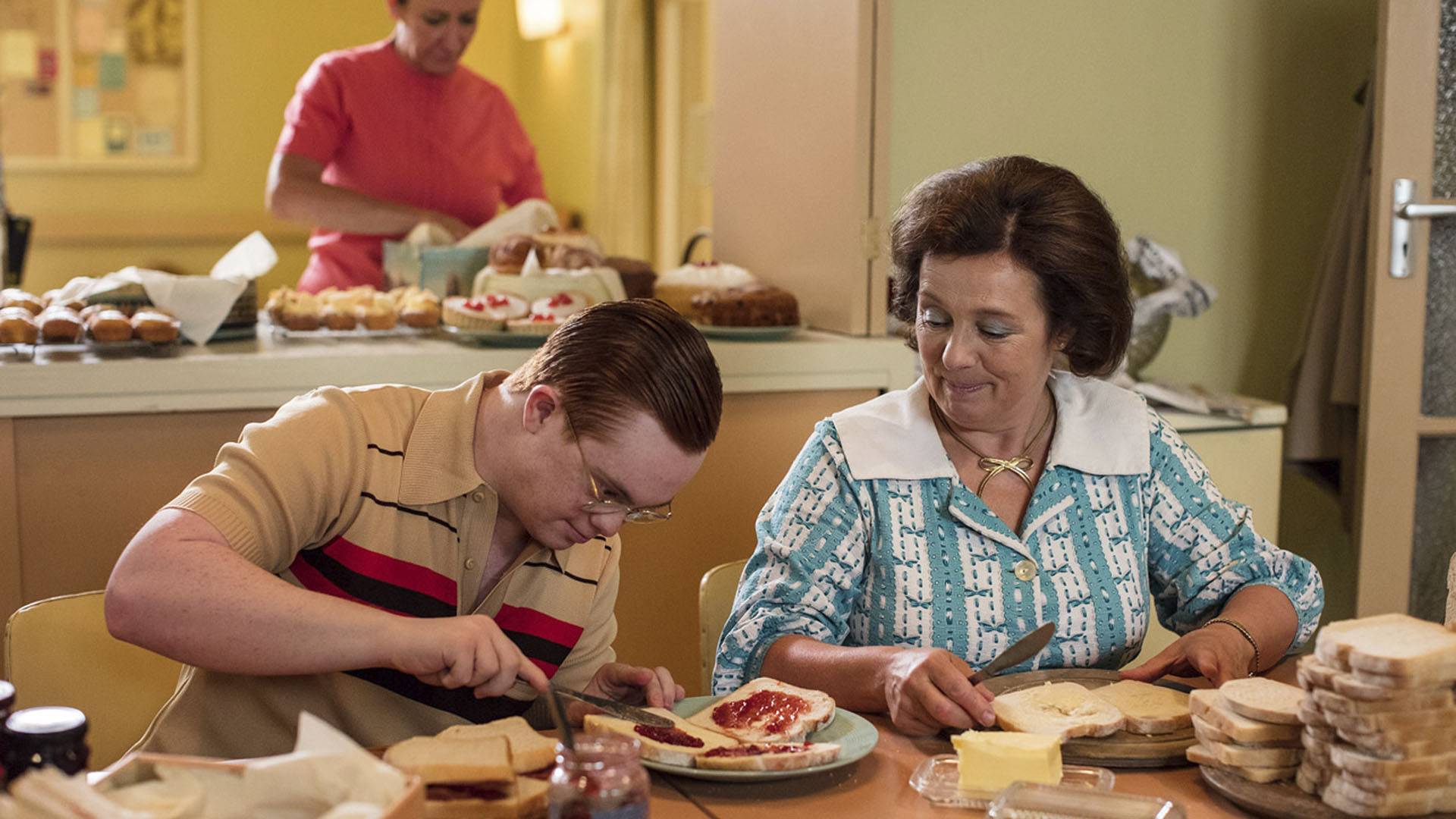 Catch up on Season 7, Episode 5 of Call the Midwife. Warning: Spoilers ahead.

Misfortune has plagued Nonnatus House this season, and the midwives’ personal lives have been put on blast. Last episode, the spotlight was cast on two of our favorites: Sister Monica Joan faced the reality of needing a cataract operation and Trixie spiraled back into alcoholism following a breakup with Christopher. Now we learn Trixie’s headed off to her aunt’s house for many months to collect herself, and Christopher vows to be there when she’s ready to return. As the women continue to be challenged with an overwhelming amount of bad luck on the reg, they still charge forward — because the grind never stops. So let’s jump in and see what’s in store for them as we continue with Episode 5.

This episode, “Call the Midwife” takes us to the home of Eunice and Kenny Dobson. Already parents to their son Michael, the couple is expecting a second child. Though this would seem like a reason to pop some bubbly and celebrate (at least for Kenny), it’s clear from the beginning that there’s trouble looming here. Eunice, who looks like she’s due any day now, displays a severe lack of enthusiasm for her impending delivery and even appears agitated when her husband questions her about preparations for the baby.

Of course, her melancholy state seems to go unnoticed by Kenny, and because he hasn’t quite mastered the art of telepathy, it isn’t until he drops by the clinic to surprise her that he discovers Eunice hasn’t been to one doctor’s appointment throughout her pregnancy. When he confronts her, Eunice only responds with a cryptic message, lamenting that her pregnancy is “not like how it was before.”

As the couple works out this *minor* issue, a young sailor who recently arrived at Poplar has found himself in a tough spot of his own. Forced out of his hiding spot amidst the cargo of a docked boat, presumably to hide his illness, Ade Babayaro has been forced into the streets of Poplar. When we first see him, his face is concealed with a scarf, which appears to be hiding an unpleasant ailment or deformity. As Ade wanders through the city streets searching for the Seaman’s Mission, everyone he comes across is turned off by his appearance and they refuse to help him. Eventually, he finds his way to refuge and is visibly shaken by the trauma he’s experienced and fear of what could be a progressing illness.

3. An Outbreak Causes Panic in Poplar

Sadly for Ade, who only had a single day of peace and quiet at the Seaman’s Mission, it didn’t take long for things to take a turn for the worst. The secret surrounding his hidden face piqued his roommate’s interest, and after the sailor returned one evening, he drunkenly challenged Ade, demanding to know what he was hiding. After a tussle between the men, Ade’s scarf was torn away from him revealing an unsightly vision of lumps scattered across his face.

Bewildered, his roommate presumes this to be smallpox and alerts the others in the building, forcing Ade to flee once again from what he thought would be a safe space. As all gossip does, the news about this potential smallpox outbreak spreads like wildfire through the city and Dr. Turner warns the midwives to look out for Ade and for symptoms of the deadly virus in others.

Unable to administer smallpox vaccines to their patients until medical professionals have confirmed Ade’s sickness, the midwives find themselves on a desperate mission to find him. Meanwhile, Poplar’s favorite event planners are busy with an important request from the city councilor. After holding a successful beauty pageant for the community, the power couple has moved onto greater things as they bring back a tradition with the Poplar Picnic. Because what goes better with smallpox than scotch eggs and sausage rolls?

After Kenny learns that Eunice hasn’t had an appointment with a midwife yet (only kind of important nine months in), Lucille calls on the family to check on their baby’s health. During a series of visits, she notices that Eunice is always on edge, resisting medical attention and even dismissing the idea of a hospital birth. However, when her mother-in-law shows up at their home unannounced with a handmade sweater for the baby, this sets her off completely. Eunice then tearfully explains that she had a traumatic delivery with her first child. Consultation with Dr. Turner reveals she’s developed a phobia of childbirth.

As party planning begins for the Poplar Picnic, Reggie helps Fred and Violet as they collect food donations from the community. On his way home from an errand with Violet, he stumbles upon Ade, who has been hiding in an underground storage unit near the docks. Though the sailor attempts to flee, Reggie comes across his hideout and befriends him.

7. Not Everything Is As It Seems

Kind-hearted and always eager to help others, Reggie offers to aid his new pal and secretly makes food runs to him every day. Initially, he promises he won’t disclose Ade’s location to anyone, but it’s only a matter of time before Fred and Violet catch wind of Reggie’s excursions when he fails to deliver a cake that was donated for the picnic.

When they realize he’s been exposed to smallpox, they immediately bring in Dr. Turner. Luckily, he doesn’t show any signs of the disease. With a little prying from Nurse Crane, Reggie eventually discloses Ade’s location and she travels alone to the docks. There she finds him in poor condition and in desperate need of medical attention as his illness progresses. Though Ade protests her help, Nurse Crane examines him and, in a surprise twist, realizes he doesn’t have smallpox. Finally diagnosed by a medical officer, Ade finds out he actually has leprosy and can be cured.

After his new diagnosis, Ade receives word that a specialist hospital in England has agreed to take him in. Despite the chance for recovery, he knows that leprosy can be fatal and turns to God for comfort. While in prayer at the chapel, he’s startled when Sister Monica Joan approaches him. He admits to her that he’s felt alone for some time and worries he’ll always be an outcast. Sister Monica Joan reassures him that with faith and God, he’ll never truly be alone.

9. Eunice Pushes Through Her Fears - Literally

With the smallpox crisis resolved, Nonnatus House turns its attention back to Eunice as she begins to go into labor. Overwhelmed with her fear of giving birth, she locks herself into a bathroom and forces Kenny to call Lucille. Kenny insists on kicking in the door, concerned that Eunice might harm herself, but Lucille arrives and urges against this. Instead, she is able to talk Eunice down and encourages her to come out of the bathroom. Shelagh arrives with Dr. Turner soon after.

As stressful and terrifying as you would imagine it to be, Eunice proceeds with her delivery (not that she has a choice). After many tears — from all parties — and pushing, Eunice delivers her baby and is both relieved and overcome with joy upon seeing her daughter. It’s a happy moment for all. Also, props to Lucille for dealing with some of the worst cases we’ve seen this season.

To wrap up this week’s exciting events, the Buckles move forward with the Poplar Picnic, something that everyone needed after the entire neighborhood was on high alert. And as if free food and party games couldn’t get much better, the group receives a welcome surprise (especially after Trixie’s departure) when Barbara and Tom return. Their presence is initially mistaken as a visit, but Tom declares to the cheerful crowd that his Mission to Birmingham is complete and that the couple is home for good. With this, the midwives have survived yet another day in Poplar. Cheers to that!

Forgot how we got here? Catch up on Season 7, Episode 4. And don’t miss our modern take on “Call the Midwife”: The Modern Midwives Blog.

Which 'Midwife' Could Really Deliver a Baby?

Could the actors come through in an emergency? Their answers and other fun facts.