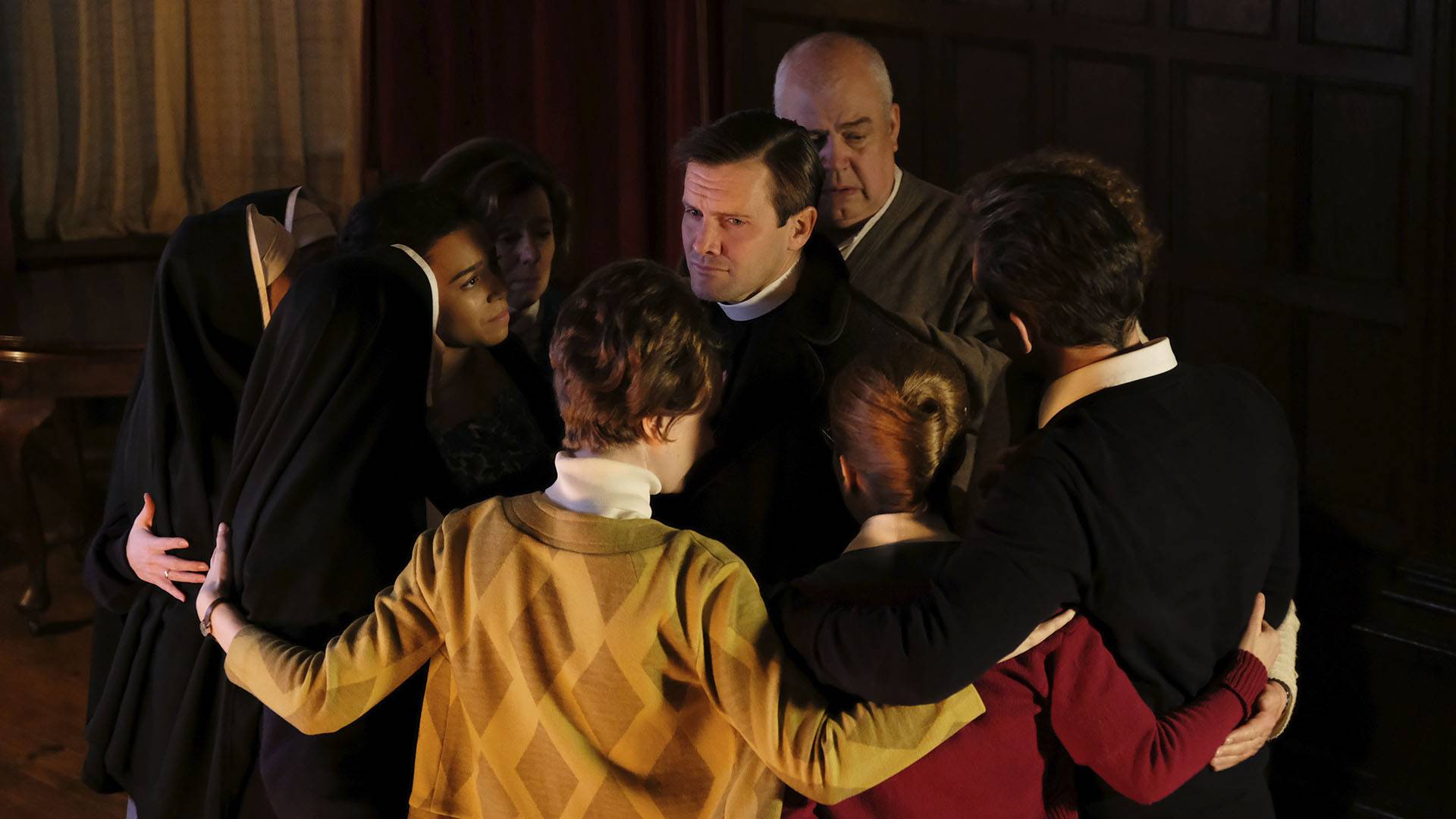 Catch up on Season 7, Episode 7 of Call the Midwife. Warning: Spoilers ahead.

My, how time flies! With only one more week to go, the Season 7 finale of “Call the Midwife” is creeping up on us. It seems like it’s been a lifetime since Trixie left the house following her breakup with Christopher and, despite her somewhat recent arrival, it feels as if Lucille has been a Nonnatan all along. From Sister Monica Joan’s cataract surgery to Trixie’s relapse with alcoholism, a lot has happened this year and we’ve required tissues for at least half of the season thus far. Don’t worry though. We’ll be making up for the other half today as we cry our way through the entirety of Episode 7.

1. Trying Times for the Herewards

When Episode 6 concluded, we were left with a cruel cliffhanger as Tom raced to St. Cuthbert’s Hospital to be by Barbara’s side. Last week, what appeared to be a common cold gave way to signs of a more serious illness as Barbara grew feverish and an unusual rash began to spread across her body. After an initial diagnosis from Dr. Turner and now a lumbar puncture at the hospital, the results are finally in… and as you probably suspected, they’re not good. Doctors have confirmed that Barbara has meningococcal septicemia, an extremely serious and often fatal infection of the bloodstream. The news is devastating, and as Tom struggles to absorb the enormity of the situation, Nurse Crane puts on a brave face to be there for him. At the risk of further infecting her, neither Tom nor Barbara’s peers can be in close contact with her. Now all they can do now is wait.

Despite the unfortunate events affecting his loved ones, Dr. Turner must turn his attention toward other medical matters. He leaves Tom in the caring hands of Nurse Crane and travels to Wadelock House, a juvenile detention center. Providing medical assistance for a scabies outbreak, he meets Michael Sumpter, a teenager who was sent to the center for car theft. During his time there, Dr. Turner notices that Michael tends to be singled out by the other boys and takes pity on him.

As the two form a friendship, he later discovers that the young teen is expecting his first child with his wife. Worried about his mental state as an outcast at Wadelock and learning that Michael doesn’t have any immediate family to watch over him, Dr. Turner recruits Shelagh to search for Michael’s mysterious betrothed. This proves to be more difficult than they expected, because nothing comes easy in Poplar.

At Nonnatus House, the atmosphere has drastically shifted as the midwives come to terms with the gravity of Barbara’s illness, but as always, they have to move forward. As the medical staff at St. Cuthbert’s do what they can to help their dear friend, the rest of the Nonnatans jump into action to help Barbara with her patients. Concerned about possible exposure, Lucille checks in on Alecia Palmer and her newborn, to ensure that neither mother nor baby have been affected by the septicemia while under Barbara’s care.

While she’s there, Lucille finds that Alecia is also from Jamaica and the two women bond over home and their shared faith. But as they dive into conversation, Alecia notices a hint of homesickness in her new midwife and tries to bring her under her wing. She kindly offers Lucille a place in her husband’s parish, but Lucille denies this and explains that she already attends another church as one of their chorus members.

4. A Glimmer of Hope

Waiting for Barbara to wake, Tom refuses to leave the hospital despite pleas from Barbara’s head nurse Sister Grant that he go home to get some rest. As the pair becomes better acquainted, Sister Grant allows Tom to sit with Barbara while she sleeps, as long as he’s fully covered in mask and gown, and is also the first to alert him of improvements in Barbara’s health.

A penicillin treatment appears to be aiding her on the road to recovery, and when Barbara is no longer susceptible to infection from outside visitors, Tom returns to her bedside to speak with her. Though at first she doesn’t acknowledge his talk of the future, living in the countryside with babies and growing old together (we’re weeping), a fatigued Barbara finally awakens to find her husband by her side.

5. Lucille Has Trouble Fitting In

As the midwives anxiously await news of Barbara’s health, Lucille, Fred and Valerie sort through the gifts and cards that have been delivered to Nonnatus House. During their conversation, Lucille notes how lucky Tom and Barbara are to be so loved by their community though neither of them are Poplar natives. This comment sticks with Valerie, who believes Lucille still doesn’t feel welcome amongst her work comrades. When she confronts her, Valerie realizes Lucille has actually been facing issues at her church that have made her feel more isolated. With racism and prejudice still rife in the city, Lucille explains that the other churchgoers have not been pleased with her after she accepted a solo in the choir. Valerie urges Lucille to join Alecia’s prayer group but Lucille worries about giving in to the ignorance of her peers.

Barbara’s sickness continues to escalate, but with little they can do and shifts that need to be covered, Shelagh steps in to help the midwives with their calls. After a failed search for any women at the clinic who go by the married name Sumpter, she stumbles upon a bit of luck when she visits Alison Wetherley, a young mother-to-be. Shelagh mistakes her for a single mother but Alison corrects this and clarifies that she used to go by Mrs. Sumpter before she was under her mother’s care. During this encounter, Shelagh tells Alison that Dr. Turner has met her husband.

7. Visiting Hours Are Over

When Barbara regains her energy the following day, she receives a slew of visitors from Nonnatus House. Pleased that she appears to be on the mend, Tom and the others are in high spirits. Don’t be fooled, though, because the merriment is short-lived. After the celebrations and well wishes come to a close, Barbara spends the rest of her night with Nurse Crane, who has come to be one of her closest confidants in the house. During their time together, Barbara shares an alarming revelation before Nurse Crane retires for the evening. Bringing one of her hands into view, she slowly unclenches a fist to uncover three newly discolored fingers where the septicemia has severely damaged her tissue. It’s the bad news that neither of them wanted and a sign that her symptoms have become quite grave again. Nurse Crane notifies Sister Grant, Tom and the rest of the midwives and they discuss the possibility of Barbara needing an amputation.

Later, Dr. Turner revisits Wadelock House to meet with Michael as his court date looms over him. The two practice Michael’s dialogue together, and while Dr. Turner tries to help him express his guilt in a more meaningful, eloquent way, he notices that Michael still struggles to find the right words to say. He requests to speak on Michael’s behalf, but Superintendent Thomas, who has worked at Wadelock for some time, denies this and insists that Michael isn’t a special case that can be granted exceptions. Unable to fight him on the issue, Dr. Turner does all that he can do and stands by Michael’s side as he faces the magistrates.

On Michael’s court date, another friendly face emerges when Alison arrives for a show of support for her husband. Asking Dr. Turner to console his wife after she’s taken from the courtroom, Michael suddenly finds the strength he needs to stand before the magistrates on his own. Despite a powerful and genuine speech, however, he is still sentenced to three years in a juvenile prison. He’s disheartened by this, but a visit from Alison and his newborn baby boy convinces him to set off on the right path. Dr. Turner reminds him that as a dad, he needs to prove to his family that he can do right by them so he can be there to support them after his sentence is complete.

9. Eternal Love and a Final Goodbye

As one life begins, another is sadly coming to an end. Tom and the midwives prepare themselves because the worst has finally come. Though conversations of an amputation circulated throughout the hospital, Sister Grant explains that losing fingers aside, the damage to the rest of Barbara’s body from the septicemia can’t be undone. This becomes more evident when she slips out of consciousness again. With little time left, Tom and Nurse Crane rush to be with her during her final moments. When she passes, Tom leaves her with the blade of grass he proposed to her with in South Africa. We thought Sister Evangelina’s death in Season 5 was tough, but this is next level.

When Tom and Nurse Crane return to Nonnatus House, the two grieve together surrounded by their friends. That sound of flowing water that you hear? Oh don’t worry, we’re just over here crying a river. We only got Barbara back at the end of Episode 5, and just like that, she’s gone. We don’t know how Tom will move forward without her and quite frankly we don’t know how we’ll manage to cope with her absence either. One more episode remains to wrap up Season 7, and we feel a little, no extremely, gypped, but here’s to hoping that things look up with the finale.

Forgot how we got here? Catch up onSeason 7, Episode 6. And don’t miss our modern take on “Call the Midwife”:The Modern Midwives Blog.