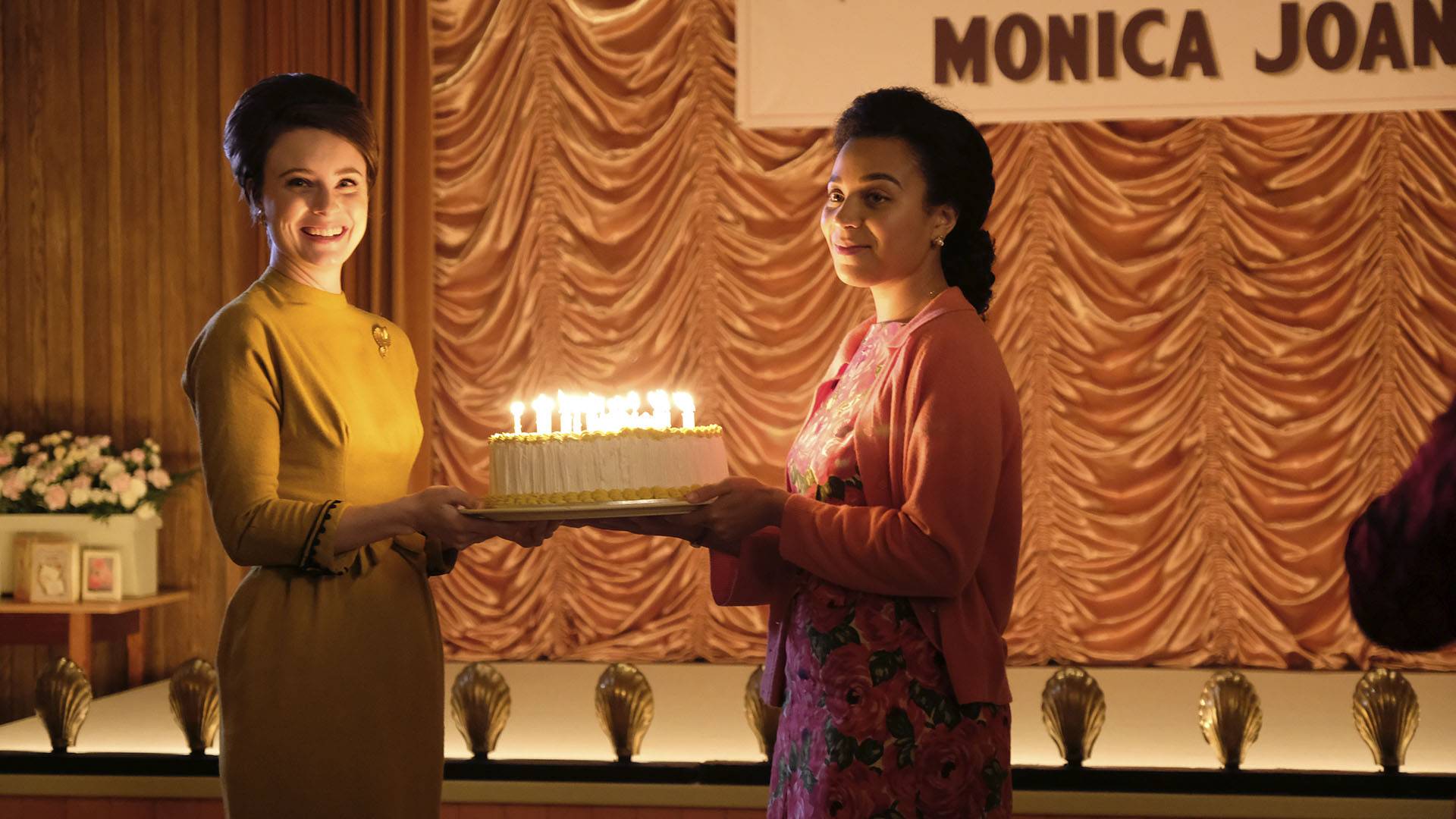 Catch up on the Season 7 finale of Call the Midwife. Warning: spoilers ahead.

We’ve made it to the Season 7 finale of Call the Midwife and it has been quite the journey to get here. Over the past two months, our Sunday nights have been spent with the hardworking women of Nonnatus House as we witnessed them brave some of the biggest blows the series has delivered thus far. From Barbara’s death to Trixie’s breakdown, if we’ve learned anything this year, it’s that we needed to grow a thicker skin at least three seasons ago. So as this chapter comes to a close, let’s join the midwives for one last hurrah. Here’s what went down in Episode 8:

Illness, family turmoil and even a patient death have overwhelmed the Nonnatans this year, but nothing has impacted their lives quite so much as dear Barbara’s passing. Brought on by a case of meningococcal septicemia, her death was sudden and took everyone by surprise. After a heartbreaking episode last week as Tom and Nurse Crane sat by Barbara during her final moments, her friends and family now lay her to rest and say their goodbyes one last time.

At a loss following this tragic event, Tom is torn over his next steps and what is to come of his future. After Barbara’s funeral, he questions whether or not he should take a leave of absence to be with his parents or if he should trudge through the pain alone. Sister Julienne urges him to remain in the company of others as he grieves, and in the end he doesn’t object to this, noting that he now has years of solitude ahead of him.

While Tom and the others mourn through tears and sorrow, Sister Monica Joan takes a different approach to coping. She refuses to allow her emotions to envelop her completely, and instead busies herself with world affairs. Even when the house’s new television breaks, she doesn’t let that bring her down as she ventures to the nearest cinema to sit in on the newsreel that precedes the feature film. There the projectionist Stanley Hodgkiss informs her that a ticket purchase is required regardless. Unwilling to miss out on her daily dose of current events, she uses Nonnatus House funds to support this — because it’s purely educational, of course. As her world of television news on a clunky set at home expands to Hollywood films on the big screen, she’s quick to become Poplar’s new cinephile.

Lucille meets Stanley’s daughter, Olive Hodgkiss, a single mother-to-be who left her husband after learning of his affair with another woman. She now lives in the care of her father and receives frequent visits from his best friend and fellow veteran, Donald, who helped the Hodgkiss family raise her. Though Lucille’s interactions with Donald are brief, signs of memory loss present themselves almost immediately. This is especially evident when Donald walks into the Hodgkiss home one day half dressed and seeking Stanley's deceased wife, Myrna. Though Lucille attempts to talk him down, he wanders off while she’s providing care to a now-agitated Olive.

When the police are finally able to bring Donald into the station, Dr. Turner examines him and discusses his illness with Sgt. Woolf, who reveals that this is not the first time Donald has been arrested. The question over Donald’s sexuality is introduced when Sgt. Woolf explains that he was once arrested several years ago for gross indecency. Dr. Turner points out that this is in no way relevant to his deteriorating mental state (bless you, Dr. Turner), and offers to bring the elderly man home. Before he does so, Stanley arrives to see his friend back to his flat, claiming that he’s his neighbor.

Sister Julienne is not the only one who’s found it difficult to communicate her feelings to her peers, preferring to go through the stages of grief on her own. As Nurse Crane goes back to work, she meets Josie Winterlee, a young woman who has expressed a desire to give her baby up for adoption. The two do not get off to a good start as Nurse Crane lets her emotions over the loss of her best friend, as well as a recent back injury, affect her professional interactions with her patient. Though she too has a fiery spirit, Josie becomes discouraged by her midwife’s negative attitude and worries about Nurse Crane being her primary caretaker during her approaching delivery date.

After their ordeal at the police station, Donald and Stanley make a visit to the doctor’s office where Dr. Turner presents Donald with a simple memory test. When Donald realizes that his mind is failing him, he attempts to leave the office. Stanley stops him and assures him that they’ll get through this obstacle together. The intimate statement reveals the true nature of their relationship with one another. When Dr. Turner realizes that they are more than just neighbors and friends, he and Stanley share a silent understanding with one another.

As confirmation of Donald’s dementia leaves Stanley with major decisions to make, elsewhere in Poplar, Tom returns from his weeklong stay with his parents. Still in mourning, he arrives at Nonnatus House with all of Barbara’s effects. He insists that as someone who always wanted to help others in need, and believing this will also help him move on, Barbara would have wanted to donate her possessions. Sister Winifred denies his donations, feeling it’s too soon. Instead, she says she’ll keep Barbara’s things in safe keeping at Nonnatus House until Tom has moved through the process of grieving and can more clearly decide what he wants to do with her belongings.

After Donald and Stanley’s session with Dr. Turner, things heat up at the Hodgkiss residence when Olive learns that her father wants Donald to move in with them. Olive is distraught at the idea of a crowded house, as she gets closer to having her child, and also conveys her concern with two grown men living together under one roof. As their argument continues, the secret of Donald and Stanley’s relationship that Olive may have suspected all along is exposed. Olive struggles to absorb the information and is stunned when she discovers that her mother was also aware of her father’s feelings throughout their marriage.

When Olive goes into labor, the argument between father and daughter continues at the maternity home. Olive admits how lonely she has felt in her pregnancy and is saddened that her dad has continuously stood by Donald but hasn’t provided her with as much love and emotional support when she needed it most. Stanley is surprised at this and assures her that she’s never been alone in her hardships. As tensions rise, their conversation is interrupted when Lucille enters the room to prepare Olive for delivery. With her trusted midwife by her side, Olive gives birth to a healthy girl as her father anxiously waits for the arrival of his grandchild outside.

Despite their quarrel just hours prior, the new baby seems to sway Olive’s opinion of Donald and Stanley’s relationship. When the two visit her later that night, she acknowledges that she knows how much her father and even Donald care for her, and that she’s happily accepted their new family unit.

Meanwhile, in the next room, Josie is beginning to experience contractions. Having arrived at the maternity home early in hopes that a new midwife would be available for her, she’s dismayed when she realizes Nurse Crane will still be the one to deliver her baby with all of the other nurses preoccupied. When Josie makes this confession, Nurse Crane realizes how tough she has been on her, and despite their differences, lets the scared mother know that she will be there for her during this important moment.

So with Nurse Crane’s assistance, Josie has a relatively smooth first delivery and gives birth to a beautiful baby girl. Having finally bonded with Nurse Crane, Josie later reveals that she has chosen a name for the baby before she gives her up for adoption. Nurse Crane is in awe when she hears that it is Barbara.

Later, Tom receives a bit of a boost during his grieving process through an unexpected source. Reggie, who had previously observed how lonely Barbara’s grave looked while tending to his late mother’s grave, appeared at Tom’s doorstep with a gift. The two take a walk to Barbara’s resting place, and when Tom unwraps Reggie’s present, he reveals a small tin carousel. Tom stands by Reggie, admiring the thoughtful gift, a nod back to Season 6 when Tom surprised Barbara on their wedding day with a rented carousel following their wedding. *Cue tears again*

Each member of the group slowly finds their own way to fill the void that has resulted from Barbara’s death, but as soon as it seems like everything might return to normal, word spreads across the globe that President Kennedy has been shot. The shocking event shakes up the house, and the women soon fall back into a state of mourning for the U.S. president. Sister Monica Joan is quick to put a stop to this, and she notes that the women have allowed their grief — even for a world leader they have no ties to — to consume them. Rather than looking forward and embracing the life around them, they are getting stuck in a continuous cycle of mourning. She advises them to “cherish what remains.”

As she leaves the women to ponder over this, her speech strikes a chord with them and with Sister Julienne especially, who realizes she was too quick to reprimand her for simply enjoying her life. Taking this to heart and accepting that it's time for them to heal, the ladies put together a special birthday surprise for their friend, creating a cinema for her at the Iris Knight Institute. A large crowd of Sister Monica Joan’s peers gather for the event, complete with a viewing of her life through old film and photos, and of course, her favorite, cake — a perfect end to Season 7.

So there you have it. Season 7 has been full of ups and downs (a lot of downs, we might add) but as always, it’s been a pleasure spending time with our favorite ladies of Poplar. We’ll miss Barbara, but it already looks like things are starting to look up for Nonnatus House.

Forgot how we got here? Catch up with our Season 7 GIF recaps. And don’t miss our modern take on “Call the Midwife”: The Modern Midwives Blog.