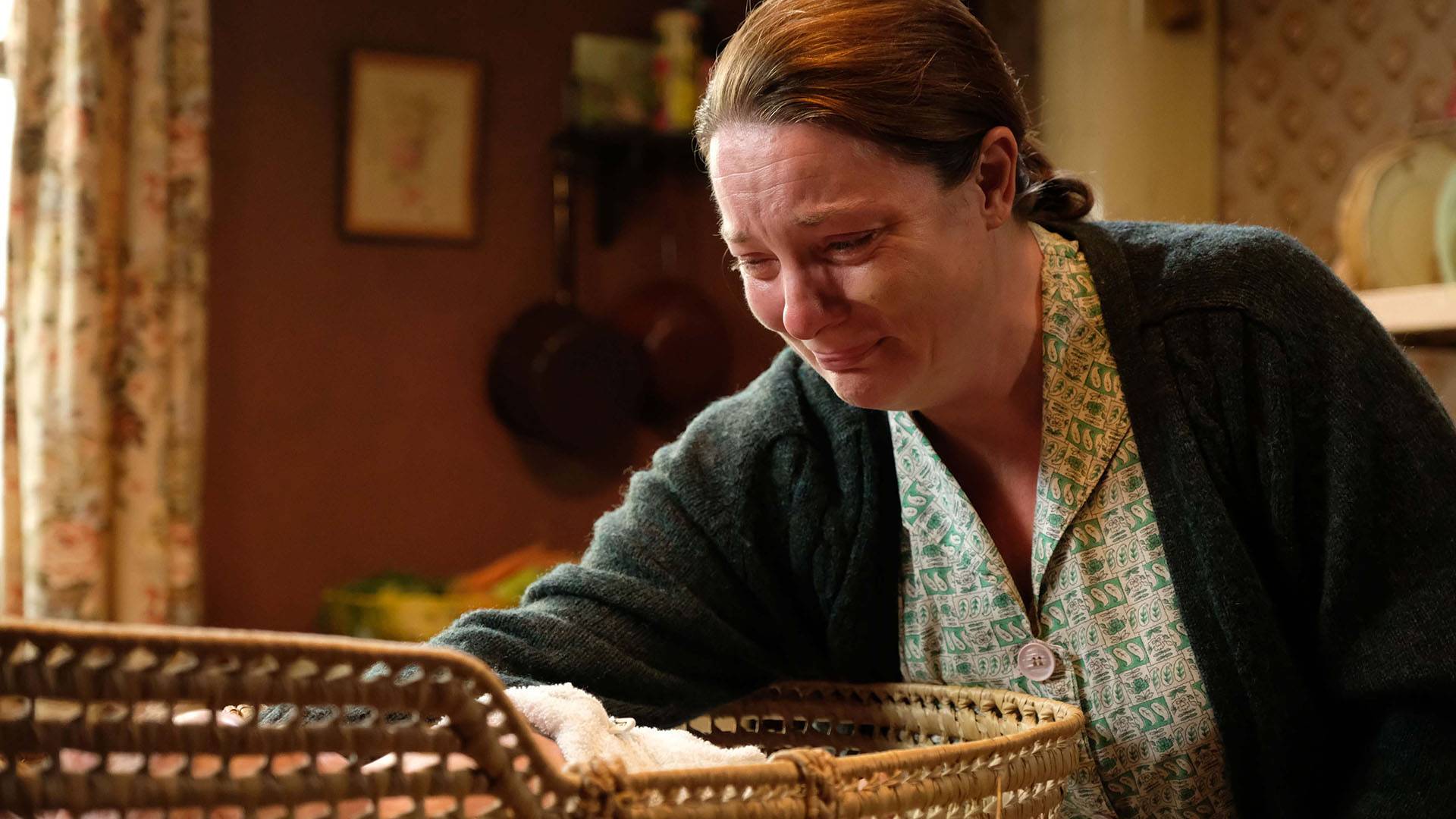 We won’t deny it – this season of “Call the Midwife” has gotten off to a bleak start. A big ol’ YIKES doesn’t even begin to cover it. While we can usually turn to the dulcet tones of Jenny Lee’s episode narration to comfort us through the tragedies that are cast upon the midwives each week, we’re having some trouble keeping it together lately.

Will families be torn apart? Will all the babies be ok? Is there enough cake to go around left for Sister Monica Joan? We’re not sure, but we also have such an investment in the lives of the midwives (and of course their SOs) that we’re staying on this train to find out. So with that pep talk, let’s do this thing.

As Episode 3 opens, we travel to the Marwicks’ where Betty Marwick is running the family’s day-to-day while her husband Donnie is working near Newfoundland. Screaming children and tight quarters might be intimidating to some, but for Betty, it’s a walk in the park. With Donnie out at sea, the mother of five remains calm and collected in her frenzied household despite having so much on her plate and a sixth on the way. Luckily, she also has Valerie to assist her through her pregnancy.

As Valerie helps corral Betty’s children, Trixie, Shelagh and Sister Frances kick things off for a new vaccination trial at the community center. While we’ll admit that we watch “Call the Midwife” because of our unhealthy attachment to the characters, we also stay for the educational lessons and leave with an appreciation of the medical advancements that have been made over the years. This week is no different as the nurses shed light on the dangers of measles.

As a vaccine is introduced to reduce the outbreak in children, the midwives hold a meeting to teach mothers about the disease and encourage parents to sign their children up for the vaccination. Though their efforts are commendable, Miss Higgins isn’t too pleased when she catches Trixie and Sister Frances sifting through patient records and disrupting her perfectly organized filing system. Though it’s all in the name of health as they search for infant candidates for the trial, Miss Higgins is all “my way or the highway” and has no time for friends apparently.

Following that cringy exchange, the trial continues as scheduled, and Dr. Turner’s son Teddy becomes the first volunteer for the shot. 30 Poplar women also agree to participate in the vaccination process, a successful roundup thanks to the efforts of the midwives’ recruitment (see, Miss Higgins?).

Yet because life is full of uncomfortable situations that give us secondhand embarrassment, the team runs into a sticky situation when Hazel Becker, a mother new to the area, attends the meeting with her daughter Dawn. It isn’t until she speaks with Sister Frances that she learns that only children 10 months and older can participate in the trial. When Shelagh also confirms that eight-month-old Dawn won’t be able to receive a vaccination, Hazel leaves agitated. I guess we can’t blame her for being upset after learning about the sometimes fatal impact of the disease, but let’s not shoot the messenger. Sister Frances was just doing her job!

'I don’t want you to be alarmed'

At the Marwicks, Betty’s contractions have commenced. But with a lengthy list of to-dos, Betty has no time for those contractions and the experienced mother goes about her business because - been there, done that, five times. Unfortunately, since babies do not operate on our preferred delivery schedules, Valerie and Lucille force Betty to slow down so they can finally examine her and get things started.

The labor proceeds without complications, but as these stories go, things don’t work out the way Betty expected. When her newborn son, Kirk, comes into the world the three women realize he’s been born with a facial deformity and that his top lip and the roof of his mouth didn’t develop in the womb - otherwise known as a cleft lip today. This is the first time we see a more vulnerable side to Betty, the mother who does it all, as she’s suddenly confronted with the unfamiliar.

Don’t worry, we haven’t forgotten about the rest of our Nonnatans. Though they might not be making house calls on mothers-to-be, the Buckles continue their work around the community. After becoming the new council member for Poplar North, Violet gets down to business fielding requests from Poplar residents, including Phyllis. The midwife and troop leader for the local cub scouts pitches the idea of a temporary “beach” outside Nonnatus House for the upcoming bank holiday. With Fred on Phyllis’ side, Violet reluctantly agrees to the event. Come on, Violet, our hearts need this.

Following her delivery, Betty consults with Dr. Turner and discovers that Kirk will require two separate operations in the coming months. As if the thought of her newborn undergoing surgery isn’t bad enough, bottle feeding Kirk with his condition proves to be much more complicated than it ever was with her past children.

A Loss in the Family

After the unpleasant interaction between Hazel and the midwives, Shelagh stops by Hazel’s house to see how she’s coping. During their conversation about motherhood and a shared understanding of a parent’s need to fiercely protect their children, Shelagh finds out that Dawn isn’t Hazel’s first child. Once Dr. Turner reads through Hazel’s medical records, he finds that her son died when he was the same age as Dawn, explaining Hazel’s constant worry over Dawn’s health.

As Hazel works through her own issues, the difficulties of raising Kirk begin to take a toll on Betty. She continues to have issues adjusting to Kirk’s needs and finds that while she’s putting all her focus on her youngest, her eldest child Keith has been getting into trouble with his friends, resulting in a visit from Sgt. Woolf.

As the pressure of caring for her children all alone gets put on full blast, she breaks down to Valerie, suggesting that Kirk might be better off with a family who can better care for him. Ugh, can a midwife please come check our blood pressure? Because the drama of this episode has our stress level turned up high.

Following Shelagh’s visit, Hazel’s fear of losing another child presents itself at the first playgroup she attends at the community center. When a girl with a mouth rash attempts to play with Dawn, Hazel swipes her hand away and causes an uproar from the child’s mother and some judgement from the rest of the group.

Later that night, she notices Dawn has also formed a rash and rushes her to Dr. Turner’s office claiming that she’s dying of measles. He informs her that Dawn has roseola, a common but mild virus. He attempts to empathize with her, however, acknowledging that raising Dawn must be quite difficult as the memory of her son lingers in her mind. Seeing the state she’s in, Miss Higgins offers to drive Hazel home, a surprising but kind gesture from someone who, up until this point, has been one of the show’s more lukewarm characters.

Man of the House

When she returns to Nonnatus House, Valerie confides in Sister Julienne, letting her know that Betty wants the midwives to look into adoption for her. Instead, Sister Julienne recommends that the women help make changes to Betty’s home environment by sending her children to school to remind Betty what it’s like to have some peace and quiet. Though Valerie is initially reluctant, she takes Sister Julienne’s advice and gets to work making changes around the house, starting with Keith’s responsibilities in the home while his father away.

As it turns out, the down time Betty has changes her perspective completely. And after a stern talking to by Valerie, Keith steps up for his sibling duties helping with formula replacement and going on strolls with the family. He even shields them from the town gossip, protesting against anyone who dare mention his baby brother in his presence. Attaboy. With this help and a less rowdy household, things are looking up for Betty who has a change of heart over the thought of adoption. Phew. We don’t think we could’ve handled that alternate ending.

When Miss Higgins brings Hazel home, she also meets her husband, Martin. The two have a heart-to-heart and he reveals that when their son died, they never had a chance to talk about the pain of their loss together. Hazel’s doctor prescribed a heavy sedative to help her cope, and because of this, she was unable to attend the funeral in Cyprus and never truly said goodbye. After the family’s move to England, his passing has been that much harder. Martin finally connects with Hazel after his conversation with Miss Higgins and tells her that he needs someone to talk to about his suffering, and she slowly opens up to him.

After this encounter, Miss Higgins returns to their home and explains that her parents died during an air raid. She too understands the burden of losing a loved one. She also reveals that her one uncle lives abroad in Canada, and because of this, he’s never been able to visit their grave. So instead, he planted a rose bush in their memory to keep them close and bring himself comfort. With the hope that they might receive some peace, Miss Higgins gifts the family with a rose bush of their own.

Snaps (or Claps?) for Betty

Over at St. Cuthbert’s Hospital, Betty is with Kirk caring for him after his first surgery. She’s done the hard work already, but enter Donnie, who finally returns to Poplar and applauds (literally) Betty for her hard work as a mother. You’re a little late to the party, Donnie, but I guess we’ll forgive you.

As if the challenges of parenthood aren’t already difficult, the Beckers and the Marwicks were put to the test this episode. But with the supportive arms of the midwives around them, they came out on the other side of their traumatic experiences much stronger than when they started. So with two happy families — and a newly opened Nonnatus House beach (woohoo!) — it looks like things are back to normal-ish in Poplar.

From Thirteen.org | The British midwives are surprisingly in sync with current health news in the United States. They conduct a measles vaccination trial at the clinic.​