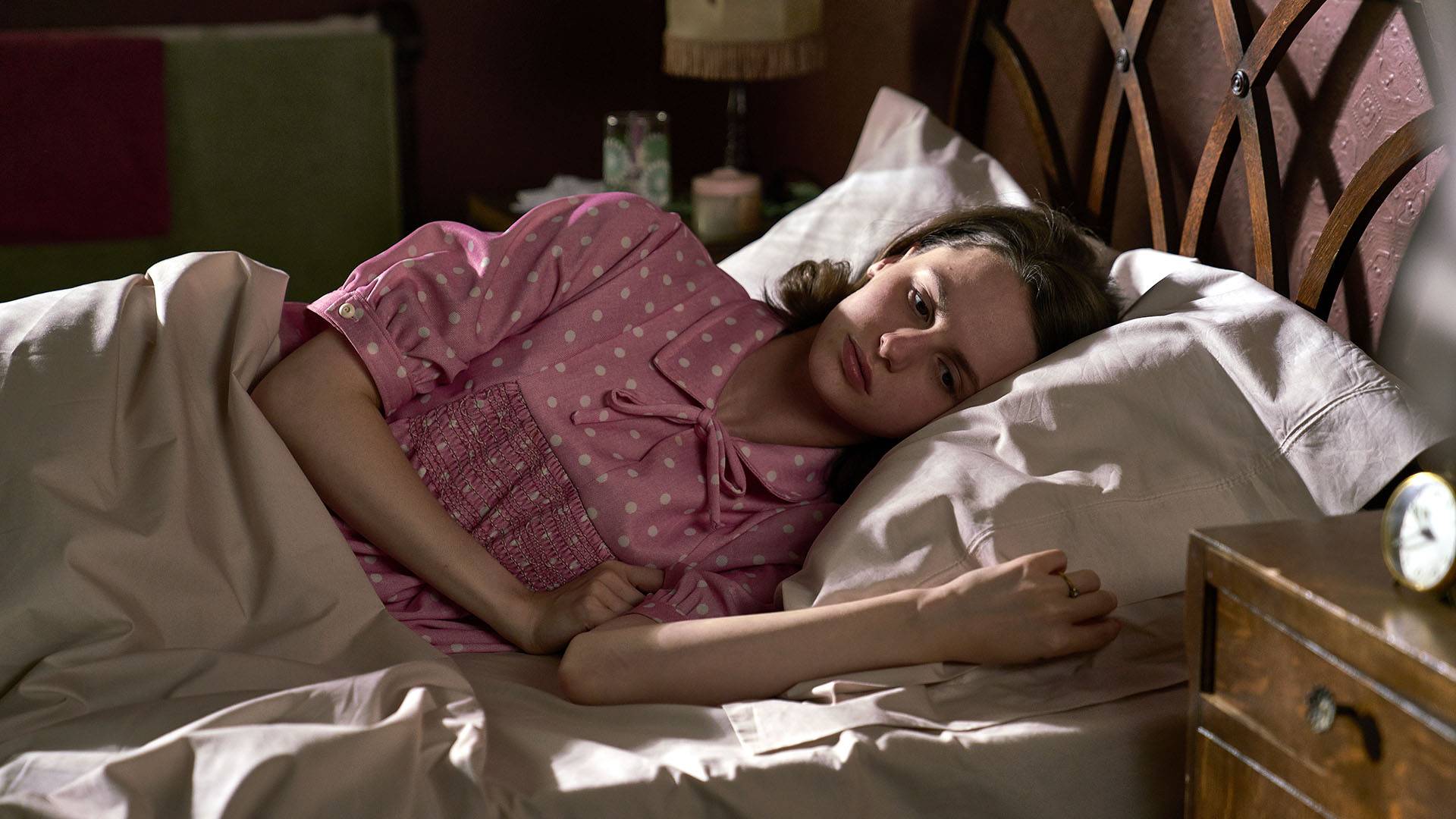 It’s a new day in Poplar, and the ladies are back on the grind. Love is in the air for a handful of our characters this week, and at the Iris Knight Institute, Dr. Turner and the midwives are taking appointments for an exciting new health screening to help with the prevention of cervical cancer.

As the midwives make their way through a list of patients participating in the cervical smear clinic, in walks this episode’s central character, Lois Parry. Trixie is the first of the midwives to make the 22-year-old’s acquaintance but greets her with a mix of curiosity and confusion knowing that Lois has secretly come to the clinic in her mother’s place. Since she isn’t at risk for cervical cancer at her age and doesn’t require any testing, Trixie questions why she’s really there.

The young woman confides in Trixie and reveals that throughout adolescence and adulthood she’s never once had her menstrual cycle. With an impending marriage upon her, Lois worries what will become of her future as she plans to become intimate with her new partner and hopes to start a family. Swooping in as the protector as she is with all of her patients, Trixie takes young Lois under her wing and agrees to pull in Dr. Turner for his assistance.

When Car Troubles Lead to Romance

When the clinic has closed up shop for the day, Phyllis, Trixie and Sister Frances make their way back to Nonnatus House. Well, they attempt to, anyway. Phyllis’ car breaks down yet again and Sister Frances chimes in with her sneaky car knowledge, explaining that the head gasket might be to blame. A recurring issue as of late, Phyllis is forced to hire someone to inspect the vehicle. Though it’s a headache for her, the arising car issues — and its handsome new mechanic — end up being a pleasant surprise for one lucky midwife.

Following Lois’ discussion with Trixie, Dr. Turner proceeds with a physical exam for her, which leads to a puzzling discovery: He’s unable to find Lois’ cervix. Concerned about further underlying health issues, he refers her to Mr. Kenley at St. Cuthbert’s Hospital to confirm his findings and to determine what the cause may be. There, Lois undergoes yet another examination, though this one proves to be quite traumatic. Already fearful during this emotionally confusing time in her life, her appointment wasn’t made any easier for her as Mr. Kenley, blasé about the entire ordeal, pokes and prods at her with a room full of medical students — all men — in observance. It’s an uneasy scene to watch… and that’s putting it mildly.

After her visit to St. Cuthbert’s, shaken and still left with unanswered questions, Lois returns to the Institute where she confides in Trixie and Shelagh about her treatment at the hospital. The women assure her that they’ll get the answers she needs — but this time, from a more sympathetic source. She later meets with Dr. Turner who passes on Mr. Kenley’s notes.

He explains that Lois was born with a rare condition called testicular feminization syndrome, meaning that she was born without a womb and that two male testes were found where her ovaries would have been. Understandably, this shocking new knowledge of herself topped with the news that she’ll be unable to give birth to children, causes a massive disruption in Lois’ life. What’s more, she’s now faced with having to share this information with her fiancé Paul and the rest of her family. This is a major hurdle in addition to an already challenging battle of self acceptance.

While Trixie does what she can to comfort Lois, back at Nonnatus House, the women meet Cyril Robinson, who has arrived to fix Phyllis’ car. A mechanic by day and civil engineer by night, Cyril is instantly captivated by Lucille. But after claiming to her peers that she isn’t one to believe in love at first sight, Lucille is quick to play coy about her feelings when she’s introduced to Cyril and disregards his advances.

Of course, she doesn’t get off the hook that easily. At Nonnatus House, gossip travels fast and it’s not long before Sister Monica Joan and pretty much every other person in the house start to play matchmaker for the pair. Ever since Christopher and Trixie’s whirlwind romance from Season 6, we’ve been eagerly awaiting a new relationship for one of our midwives, so we definitely ship this.

Alas, Lucille is not one to be easily swayed by playful flirtation or the flash of a smile. As the episode continues, Cyril does his best to win Lucille’s heart — or at least one date. Yet even with his charm and the support of Lucille’s friends, he instantly hits a wall that Lucille has put up against the notion of being romantically involved with someone with her busy schedule. Despite Cyril’s offer to take Lucille out dancing (swoon), she declines and uses her work as a scapegoat to politely exit the conversation. Naturally, Sister Monica Joan eaves drops on all of this (we wouldn’t expect anything less) and warns Lucille not to deny herself a little fun during her time off the clock, or love for that matter.

Soaking up Sister Monica Joan’s wisdom, Lucille returns to Cyril with a new attitude and some tea as a peace offering. The two dance in the streets together and it’s almost the Nicholas Sparks-esque moment we all dream of, but the impromptu date is short-lived when panic falls over her and she quickly flees, leaving Cyril in the dark without a dance partner. Ah, the cruel sting of rejection.

The Path to Acceptance

As we anxiously sit on the edge of our seats to see what will become of “Cyrille,” we return to the Parry home where Lois is continuing to struggle with her new body, one she thought she knew her whole life. Anticipating the judgment and criticism she might receive from her loved ones, and feeling that this has completely ruined her future with Paul, Lois begins to spiral.

After her meeting with Trixie and Dr. Turner, she calls off her engagement, pretending that she has fallen out of love with Paul, and proceeds to destroy her wedding dress. She later reveals the news of the syndrome to her mother, but as the grief overcomes her, she attempts to take her own life.

A New Role for Trixie

When she comes to following her overdose, Lois is greeted by Trixie who has been watching over her while she’s at the hospital. Trixie assures her that despite the challenges ahead, Lois’ family will still love her for who she is, and she advises her to meet with the volunteers at the Women’s Advice Clinic while she learns to navigate her new life and understand her body better.

When Lois returns home from the hospital, she discovers that Paul has been waiting outside to check in on her every day since she’s been gone. Though she initially decides against confronting him, with support and guidance from her mother as well as a new outlook on her situation, she finds the courage to speak with him.

With everyone taking a chance on love this episode, Lucille is quick to follow suit. After turning down Cyril’s initial request for a date, then promptly leaving him in the dust during their first dance, Lucille continues to think about what could have been and regrets being so hasty in turning down his offer. She expresses her regret to Nurse Crane, who is experiencing a similar dilemma with her own pursuer, Sgt. Woolf. Nurse Crane advises that it’s never too late and that they both need to “face the music” eventually. With that, Lucille puts on a brave face and asks Cyril for a redo.

Lois and Paul Forge Ahead

When we return to our second couple, Lois has found the strength to explain her condition to Paul. She admits that while she could never quite pinpoint why something about her body felt off throughout her life, she always knew there was something different about her. Though Lois feared the worst reaction from her husband-to-be, Paul turns out to be a pretty standup guy and reaffirms his love to her, noting that his feelings for Lois will remain constant. (Someone please tell us where we can find more men like Paul.) The two reconcile and agree to find a way to carry on with their plans and spend their lives together.

Luckily for all you romantics in the room, there are no breakups here today! While things almost took a turn for the worst, we can leave this episode feeling warm and fuzzy inside as our hearts are spared for another week. Sure, we live for the drama, but the gals deserve a little bit of peace and quiet after everything that’s transpired thus far. We’re crossing our fingers and toes for Lucille and Cyril and can’t wait to see what’s in store for next Sunday’s episode. See you next week!