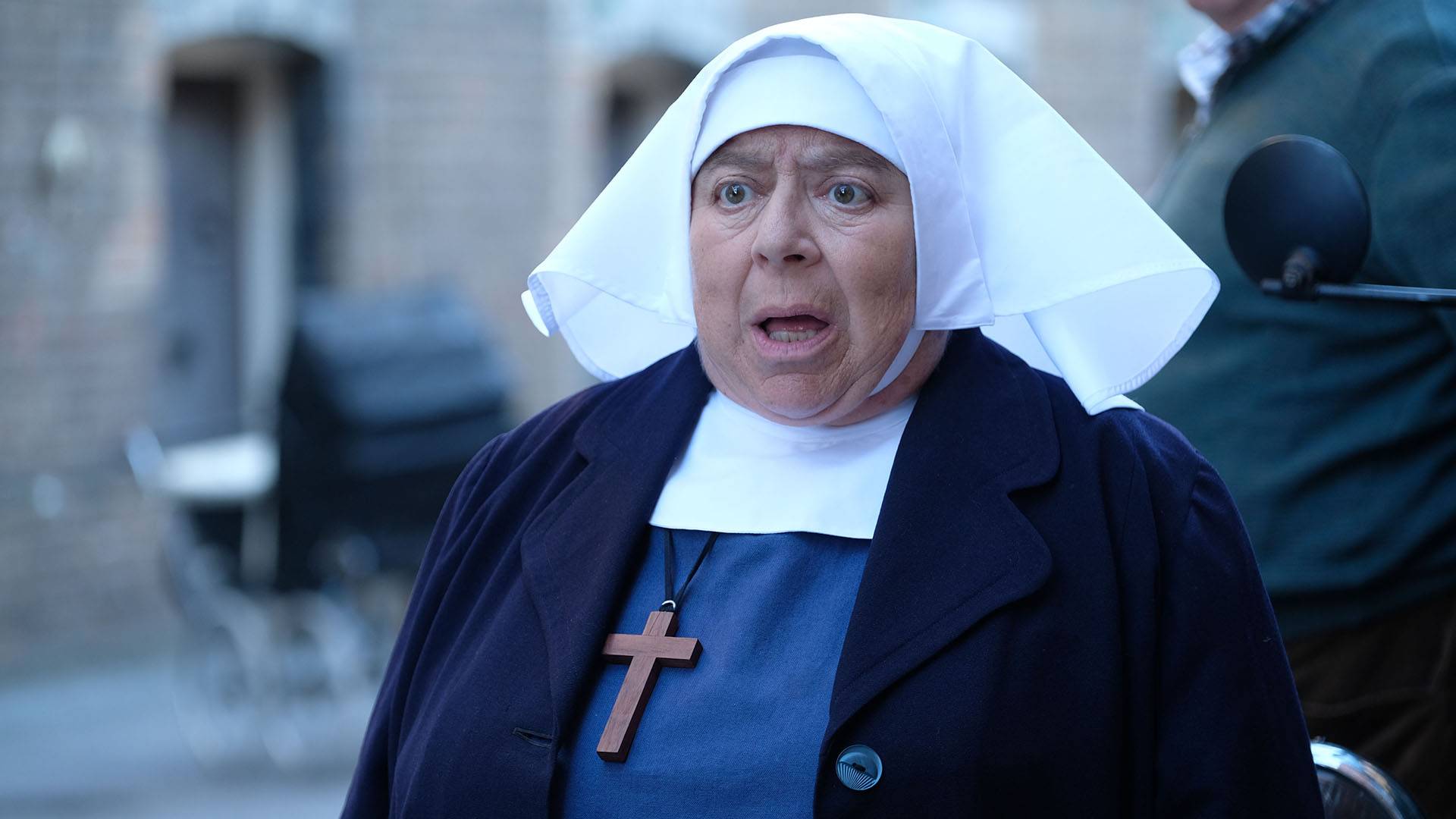 As the curtains open to this week’s episode of “Call the Midwife,” we travel to the edge of the city where father and son team Barney and Ed Brittall are hard at work at the docks. As these two new characters set the stage for our latest story, the midwives also find themselves playing host to a familiar house guest.

Filling In for Phyllis

This week, Phyllis is forced to the bench when a painful, trapped sciatic nerve sends her to the hospital at the beginning of the episode. When it’s determined that she’ll have to be off her feet for six weeks, Mother Mildred offers to send someone from the Motherhouse in her place. Yet as fate, or faith, would have it, Mother Mildred volunteers her services instead in an effort to give back and learn more about the Nonnatans’ work. While the women are encouraged by her enthusiasm, they’re not as keen to hear she’ll be shadowing them during house calls, and everyone’s quick to play a game of “not it” when she asks who she can accompany. She’s not one to shy away from letting her opinions be known and while we appreciate how vocal she is, let’s just say she teeters on the edge between being outspoken and a tiny bit abrasive.

This minor character flaw later presents itself when Trixie draws the short straw and Mother Mildred joins her on her trip to the Brittalls. There she meets the entire family, including Barney’s wife Gilda, his father Joseph and Barney’s second son John. Trixie has been treating Joseph for pneumoconiosis, which is likely a result of his former job as a docker, working around excessive amounts of dust.

While Joseph is Trixie’s main patient, the house call soon turns into an appointment for Barney as well when he pulls her aside to get her medical opinion on a red blemish that has surfaced on his neck. Mother Mildred steps in to observe the infection and states that its cause is probably environmental, not unlike infections she saw from her work in the Kowloon slums of Hong Kong.

Understandably, Gilda does not take kindly to this comment, believing it to be a statement about their own living situation and throws some major dagger eyes her way. Did it just get cold in here? Oh, no, that’s just the chill we’re feeling from Gilda’s resentment toward Mother Mildred.

Not Meant to Be

Speaking of awkward, the slow-blooming relationship between Cyril and Lucille has also soured. When Trixie and Valerie push Lucille for details following her first date, she expresses utter disappointment. She divulges the ~scandalous~ account of the night to her friends, which include a date at a West Indian social club where marijuana was present and that despite what she had heard through the grapevine Cyril is not a pastor, nor does he attend church. We sense a deal breaker here.

Later, upon taking Trixie’s advice, Barney schedules an exam with Dr. Turner where he’s confronted with an unfortunate diagnosis. Dr. Turner suggests the possibility that some of the products Barney handles while at the dock, like bone meal, could contain traces of anthrax. After further testing, they confirm the often-fatal infection and begin treatment immediately.

While the Brittalls cope with the enormous weight of ailing family, the Turners struggle with their own family dilemma. During this season’s Holiday Special, Patrick and Shelagh brought May, an orphaned child from Hong Kong, into their home as her foster parents. May instantly became part of the family as Tim took her under his wing as a brother figure and Angela became her playmate both at home and school. Yet just as the Turners start to become attached to their foster daughter, word from the Nonnatus House charity arrives about plans to move May in with her permanent family. Though Patrick and Shelagh knew their time together would be temporary, the news serves a brutal blow as they realize how much they care for her.

At the maternity home, Lucille attempts to rid her mind of he who shall not be named and busies herself during her night shift. There she encounters Elaine Pilkington. The young woman, who has concealed her pregnancy beneath layers of clothing, stumbles in exclaiming that she’s in labor. When Lucille offers to call her parents as they prepare for the birth, Elaine promptly rejects this, implying she might have something to hide. From this conversation, Lucille discovers that Elaine is only 17.

At the Brittalls’ house, the toll of both Joseph and Barney being sick (Joseph likely on his death bed) is overwhelming. To make matters worse, all work has been halted at the dock after word spreads about the risk of anthrax infecting other workers, leaving many men, including the Brittalls without pay. With the rising stress on the family, Trixie offers Nonnatus House’s services to do what they can to assist Joseph and the others while Barney is at the hospital. Though Gilda accepts the help, she requests that Mother Mildred is not included in the house call rotations.

This of course does not go over well with Mother Mildred when Trixie attempts to explain the situation to her. Despite her unwillingness to accept that she may have caused Gilda offense during her row with Trixie, however, she later appears to reflect on their discussion and visits the Brittalls to apologize. Gilda doesn’t exactly welcome her with open arms, but as the two spend time together, Mother Mildred learns about the poor work conditions as well as the lack of proper clothing and equipment to protect the men at the wharf from dangers such as anthrax. After renewing her relationship with Gilda, Mother Mildred takes it upon herself to go straight to the source of the Brittalls’ problems to see how she can help.

When Elaine delivers her daughter, Sarah, Lucille urges her to share the news with her parents. Elaine hesitates at this and reveals that Sarah is not her firstborn. Having given birth before, Elaine was unknowingly forced to give her son away when her parents took him to "see a doctor” though they were secretly arranging to bring him to an adoption agency. She eventually agrees to let Lucille inform her parents of her whereabouts but prefaces this with a warning: that this time, her child isn’t going anywhere.

Unlucky Dr. Turner is tasked with confronting Elaine’s parents who 1. are in disbelief that Elaine was pregnant to begin with and 2. have not changed since the first baby. They both agree that unless Elaine is married, she won’t be mothering a child on their watch.

Taking on The Man

Though Elaine’s parents won’t be swayed, Mother Mildred leaves the Brittalls’ house enlightened after her conversation with Gilda. She meets with Mr. McGregor, who manages the dockers, and there she also becomes acquainted with one of the many disgruntled members of the dockers union, Pete Jessop, the union’s shop steward.

Life As a Single Mother

At the maternity home, Elaine receives a visit from her parents who attempt to bring her home — without the baby. They reiterate their sentiments over her status as an unwed woman and how it could tarnish their reputation and family business. Clearly, we know where their priorities lie, but a brave Elaine puts her foot down and refuses to surrender Sarah. Following their altercation, Elaine’s father puts the final nail in the coffin when he returns to the maternity home with Elaine’s belongings, officially abandoning her. Lucille and Ms. Higgins help her search for an organization that assists young mothers and Elaine begins looking into work as she treks into the world as an independent woman.

When Mother Mildred returns to the Brittalls’ to check on Joseph, she runs into Ed who reveals that Gilda has asked her sons to find safer jobs. Instead, he says that when Pete Jessop retires, he’d like to run for the position of shop steward to represent the dockers union and change the workplace for the better. Mother Mildred supports this wholeheartedly, and while it takes a moment to sink in for Gilda, she too approves acknowledging that her son is trying to help protect other men like Joseph and Barney.

As early supporters of Cyril and Lucille’s relationship, Trixie and Valerie are stumped to hear that Cyril lied about his work as a pastor. Thanks to a little detective work, the two piece together that the rumor was spread through Cyril’s biggest fan, Sister Monica Joan. Upon this discovery, Valerie explains the situation to Sister Monica Joan and why Lucille feels that she can’t trust Cyril, and Sister Monica Joan admits that she may have fabricated that piece of information about him.

Realizing the mistake she’s made, Lucille searches for Cyril to explain why she ghosted him and — oops — called him a liar. Luckily, he finds the ordeal to be quite comical and agrees to give her a second chance, also admitting that while he doesn’t agree with the substance use Lucille witnessed at the social club, he frequents it to feel closer to home. The two resolve their differences, and while Cyril isn’t a pastor, he does agree to join Lucille at her church for date #2. Praise.

As Episode 6 concludes, Elaine looks forward to her life with Sarah, despite being shunned by her family during her time of need. She also qualifies for national assistance to help with rent and receives space at an apartment thanks to the Council of Unmarried Mothers.

While the Brittalls experience great loss this episode when Joseph eventually succumbs to his pneumoconiosis, they experience a bit of fortune as Barney’s health vastly improves. As Season 8 begins to wrap up, we wonder what will become of Cyril and Lucille and are eager to learn more about May’s new family. Honestly, can anyone live up to the Turner family? What’s more, we hope Phyllis gets better soon because we already miss her so!

All of these questions and more answered next week — hopefully. Catch you next time, “Midwife” fans!

From Thirteen.org | The British Tele Dish