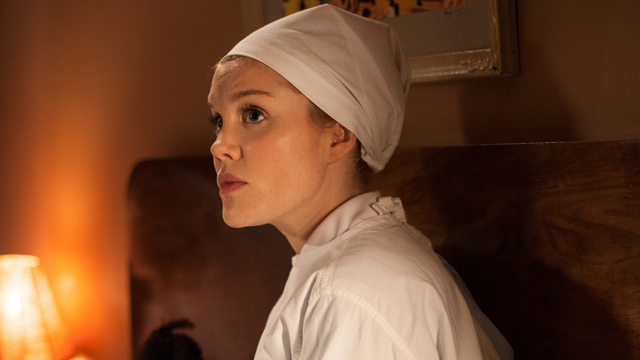 "Spring is not the gentlest of seasons.
It is as though too much has been waiting to happen, too much suppressed,
packed down beneath the earth — opened above the sky — green shoots grow sharp and the clouds are unforgiving.
Spring can be brutal.
Breaking open secrets, dragging into light those things unseen — and — giving voice to words unsaid”

In Season 4, Episode 2 we have a transfer to the hospital and clashing over the need to perfect pinard technique (that is an instrument to listen to the fetal heart rate) versus following protocol with reviewing cases with their consulting physician prior to transfers. There are undiagnosed twins and the joy and sorrow that this birth brings. Sister Evangelina learns that she will need to have a hysterectomy because of fibroids. Trixie does not get her engagement party but has a deepening of respect and love for her fiancé. New nurse-midwife, Phyllis Crane, brings a car and her talk of ‘best practices’ and we see a new side of Sister Julienne and learn of a past friendship.

As a modern day midwife I could see that some things don’t change and others march on with progress or at least what is considered best practice for 2015. In the episode they discussed the introduction of the rolodex and tracking things with logs and the discussion of ‘best practices’ for quality improvement and to improve outcomes. Today we are constantly streamlining processes and staying abreast of what is the best clinical practices or evidence based care.

This episode did bring tears to my eyes with the stillbirth of Mrs. Bissett’s first baby. It was devastating for the couple but it was very hard for the entire team. You could feel the insecurities on many levels from questioning the expertise of knowing proper technique to feeling like you need to always appear in control or capable, and the normal trauma with any poor outcome.
A stillbirth is the death of a fetus at any time after the 20th week of pregnancy. It is also called an intrauterine fetal death (IUFD). In the United States 1:160 pregnancies ends in a stillbirth which is approximately 25,000 stillbirths or 70 stillbirths per day every year (National Institutes of Health). There was a study of women’s observations and memories of their stillbirths and the authors report that 5,000 women participated and 50% of the moms reported gradual decreased fetal movement several days prior to the discovery of the death and 56% of moms reported that this decreased movement was the first reason to believe that there was something wrong (MOMS).

So what would be different for this woman if she was here in current times? We counsel women about daily fetal awareness and then discuss Daily Fetal Kick Counts. With complications they would be encouraged to begin these at 26-28 weeks — otherwise they would start at 34 weeks.

Studies actually show that in the 3rd trimester the fetus spends about 10% of its time making big gross fetal body movements and that they make approximately 30 movements per hour. There can be long periods of time, approximately 75 minutes, without any fetal movement and that a mother appreciates about 70-80% of their baby’s movements!! The peak time for the baby to be active is from 9pm until 1am which is when the mother’s sugar or glucose levels are falling. In the show the nurse mentioned to drink something cold to get the baby moving and you often still hear this advice but fetal activity does not increase after meals or glucose loads but it does help increase fetal breathing movements which can be seen by ultrasound. Things that can impact the movement or the perception of movement can be individual fetal patterns, the time of day, the age of the fetus which is called the gestational age (there is a normal decrease in number and perception of fetal movement as the baby nears full term), mother’s activity level, certain medications, maternal weigh, smoking can impact fetal movement for up to 80 minutes, the amount of amniotic fluid, where the placenta is located, and even sound stimulus can impact fetal movement.

We counsel women to pay attention to 3-4 movements in one hour or something called Cardiff Count-to-Ten and you would chart 10 movements within a 2 hour time frame. If there is a decrease noted in fetal movement then the midwife or provider may have the woman go on for further testing such as a nonstress test, biophysical profile, modified biophysical profile, contraction stress test, and Doppler ultrasound of the umbilical artery. Check out the resources if you are interested to learn more about these procedures.

“Not every love is given voice.
Not every flower comes to bloom and their folded petals must be frozen in the green.
Others unfurl and flourish turning their faces to light - they do not doubt.
Questions are best asked silently – and — sometimes not at all.

Katie Moriarty (CNM, PhD, CAFCI, RN) is the Director of Nurse-Family Partnership at Detroit Wayne County Health Authority and currently serves on the regional board of directors for the American College of Nurse-Midwives. Prior to her current position, Katie served as the Associate Director of the Nurse-Midwifery Education Program at the University of Michigan.
Read More About Katie |  Read All Posts by Katie