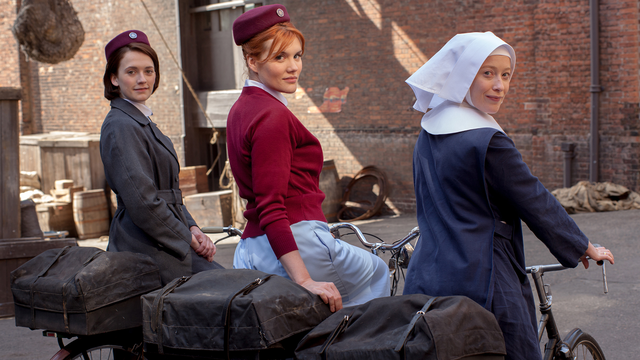 I don’t presume to speak for all midwives but I expect most midwives will recognize elements of truth in the following:

1. Emotional damage control is an essential Midwife role. All midwives find themselves undoing damage done by relatives, friends and the mere passerby who feel compelled to share labor horror stories. What is that about? I guess it is drama that gets attention. A normal birth isn’t drama enough? Then there are those who must express their opinion about the mother’s size. Suggestions of too big or too small can keep a gestating woman up at night. So remember, don’t be a Mrs. Colter. Concentrate on the positive. Like Patsy tells her, labor may not be a fairy story but cut the Grimm’s tales. Please.

2. Once a midwife, always a midwife. Skills may fade. Some practices will change. But the essence remains. Being able to keep moving toward problem resolution and staying calm at critical moments are two skills that each midwife will carry with them no matter where their life path takes them. Even more essential, the love of women and birth never fade. Sister Monica Joan and Shelagh movingly demonstrate this in this episode.

3. Busy days take a toll. Young sweet Barbara Gilbert gets the brunt of this episode’s busy day. She labored on, just like her patients, taking one contraction at a time until the work was done. Then went out and did it again, and then again. Been there, done that. What isn’t shown is the aftermath. She likely would have a work hangover that could match Trixie’s alcohol hangover. Nurse Gilbert would spend the next day rehydrating and resting if she is lucky enough to have a day off. Perhaps in 20 years, during meals her husband will say to her, as mine does to me, “ Slow down eating, you’re not at work!”

4. Balancing relationships and work is tricky. Life is stressful. Being a midwife is stressful (see #3). Call the Midwife  adds to this the wounds and insecurities of a traumatic childhood and voila: Trixie’s meltdown. (BTW, did you know there is a Campari cocktail named True Trixie? Talk about foreshadowing!) Midwives are certainly not immune to self-medication. Although I can honestly say that I have never missed a day due to substance abuse and certainly wouldn’t admit it here if I had, I have been known to unwind after a tough day with a glass of wine, Michigan microbrew beer or a nice single malt scotch, or two. I have company among my colleagues and they are much more than just drinking buddies. Midwives are a great source of support for each other and that will be Trixie’s saving grace, I hope. See #5.

5. Midwives are family to each other. Obviously, the occupants of Nonnatus House have a bond prompted by their proximity. In real life midwives have a bond prompted by their common experiences and goals as well. Just like families, there may be differences and dare I even say dysfunction. But in the end, we will be there for each other. I believe this because; despite those differences and dysfunction, we keep the dialog going. I invite you to meet other members of the midwife family through another blog. Midwife blogger; Stephanie is a self-proclaimed midwife geek. If Call the Midwife has triggered the midwife geek in you, check out Stephanie’s series of posts entitled Famous Midwives.