Hope Is a Thing of Extraordinary Power 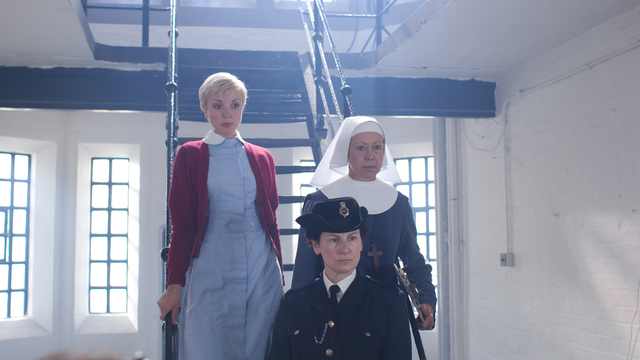 “Working as midwives in London’s East End we were no strangers to the first light or the half dark. When babies arrived we went to deliver them … it didn’t matter what the hour …”

This episode really touched me. Sister Julienne showed immense compassion and perseverance as she helped Stella through her labor and birth within the prison system. She also helped advocate for her to begin anew and actualize a new direction to her life. It made me think back to my very first position as a certified nurse-midwife working in Detroit, Michigan at Hutzel Women’s Hospital. I attended a birth of a young woman while she was shackled to the bed with the prison guards outside of her hospital room. She labored alone in the room — I was her only support person present for this transitional and pivotal moment. I do not remember her name, but I do remember her eyes as she looked at her newborn baby with love, and I felt the heaviness of her sadness.

Pregnancy is such a time of transformation and an opportunity for change and growth. With adequate healthcare, evidence based education and compassionate support this moment in time can be one of the most teachable moments for a woman. They can really engage in lifestyle behavior changes to optimize their mind, body and spirit. Experiencing a positive birth and assisting women to enhance attachment not only assists women but our communities and our society.

The United States has the highest incarceration rate in the world. The United States represents approximately 5 percent of the world’s population; however, it houses around 25 percent of the world’s prisoners (U.S. Department of Justice, 2008; World Prison Brief). According to Bureau of Justice statistics, in 2010 approximately 18 percent of the 7 million individuals under correctional jurisdiction or custody were women; 200,000 women are incarcerated in jails and prisons (Clarke & Adashi, 2011); 75-85 percent of incarcerated women are mothers; and 6 percent of women in correctional custody are pregnant (Clarke & Adashi, 2011). Women are more likely to be in prison for alcohol, drug and property offenses, while men are more likely to be in prison for violent offenses (Bureau of Justice Statistics). Males committed the vast majority of homicides in the United States, representing 90 percent of the total number of offenders (US Department of Justice, 2010).

It is startling to realize that one in 25 women entering or admitted to state prison and one in 33 entering federal prisons are pregnant (Bureau of Justice Statistics). In 2008, the Federal Bureau of Prisons barred shackling pregnant inmates in all but the most extreme circumstances and many states have similar laws; however, some states still restrain women during labor and birth (Second Chance Act). Many organizations have voiced their opposition to the use of restraints during labor and during the birth (American College of Nurse Midwives; American Medical Women’s Association; American Correctional Association; American College of Obstetricians and Gynecologists; Amnesty International; American Civil Liberties Union; Association of Women’s Health, Obstetric and Neonatal Nurses; Rebecca Project for Human Rights; National Organization of Women).

The majority of children born to incarcerated mothers are almost immediately separated from their mothers (Women’s Prison Association, Institute on Women & Criminal Justice, 2009). It is evident that incarcerated women have many more challenges to overcome in dealing with their pregnancies and their birth experiences, developing into motherhood and providing adequate parenting to their children. There are difficult decisions and limited choices as to what happens with the newborn child. There are some model programs which try to address issues such as adequate healthcare, counseling, parenting instruction, job skill education and even on-site nursery programs.

This episode has made me want to investigate my local area of Detroit and Wayne County. I would like to know more of what is available for their healthcare. Do they have access to certified nurse-midwifery care? Can they have a doula present for their birth? Are there any residential parenting programs or prison nurseries? And what programs are in place to assist them to achieve short and long term goals to foster hope and success upon their release from jail?

Just like the Nonnatus House nuns and midwives — today’s Modern Day Midwives continue to provide care to underserved women and families. We are in a position to advocate for practices and policies that facilitate optimal pregnancy outcomes, humane treatment, emotional well-being, maternal-infant attachment and healthy parenting skills.

“Hope is the thing of extraordinary power — it feeds the soul YET it can torment it. It can be dashed, yet it can show the way. We learned this and more … we learned by justice and forbearance and friendship … and what it meant to help someone move from darkness into light.”

Maruschak, L. (2008). Medical problems of prisoners. Washington, D.C.: Bureau of Justice Statistics.
National Women’s Law Center. Mothers behind bars: a state by state report card and analysis of federal policies on conditions of confinement for pregnant and parenting women and the effect on their children. Washington, DC.