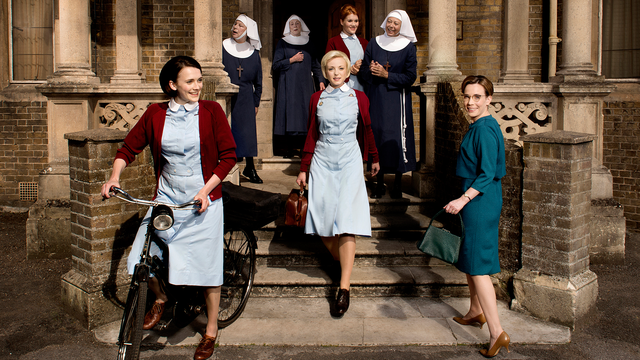 Only a few days before the PBS premiere of Call the Midwife Season 4. I am most pleased that PBS has picked up this blog to feature on its web site. I am hoping that this new exposure will lead to new readers and add depth and perspective to your viewing experience as well as offer a new perspective of midwifery.

How does 1960 London compare with 2015 Detroit? Our Call the Midwife heroines are part of the British National Health Service. Working in London’s east end, their clientel consists of working class, dock workers and shop owners. That post-war area of London housed the newest arrivals to Britain in the form of Huguenot, Irish, Jewish and Bagaladeshi immigrants. Births are planned at home unless expected to be complicated.

As employees of the Detroit Henry Ford Health System my partners and I provide prenatal care in several clinics located throughout the Detroit metro area and deliveries take place in the hospital. As far as the working class goes, Detroit is holy ground.  And just as Britain attracted a diverse population as the world recovered from WW2, Detroit’s diversity is seen in its immigrant populations including those from many middle-eastern countries as well as Bangaladesh and Latin America. It is no secret that Detroit and its citizens have struggled economically these past few years. As midwives here in Detroit we have seen this struggle take its toll on families.  But there is light on the horizon for Detroit citizens and for our Call the Midwife community.

The new season moves us forward in time. The 1960s was certainly a decade of sweeping cutural change. I look forward to see what this means for our London Midwives. Much change is in the air here in Detroit this year as well. As the weather warms so does optimism grow as we imagine the possibilities of a better Detroit ahead. Stay tuned.