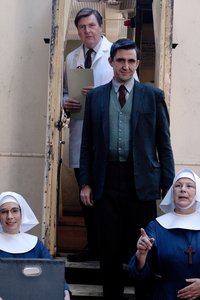 Neal Street Productions In Episode 6, Dr. Turner is determined that Poplar will get a mobile van with an x-ray machine so that the community will no longer live under the threat of tuberculosis (TB). Sister Bernadette assists with the campaign and is a fabulous advocate and supporter for this public health endeavor. She also compassionately tries to decrease a young child’s fear by entering the x-ray machine first to encourage the child to also get one. Sister Bernadette is later diagnosed with TB.

Jenny’s nursing rounds lead her to Mr. Masterson and his daughter, Julia. Jenny helps them work through their anger and grief surrounding their multiple family member deaths. Jenny has her first upright birth while Sister Julienne holds a safe spot for everyone as Mr. Masterson enters his final stage of life. Mr. Masterson gets to hold his grandson just as he nears his last breaths and lovingly tells the child, “I’m just leaving and you’re just arrived — we’re passing. I’m so pleased to meet you.”

This was an emotional episode and it made me have an appreciation for the devotion of the doctor, nurses and courageous nuns. Their work is never-ending and they are calm and very mindful in their health-care approach. As a modern day certified nurse midwife (CNM) this episode made me reflect on technology that aids us with our ability to diagnose, public health campaigns, the "Classic Birth Pose" and being truly present in a healing situation.

“Midwife” means with woman. It is of interest that the term “obstetric” derives from the Latin term obstetrix, which meant “midwife.” The origins are from obstare, which meant the midwife was to stand by or in front of the woman to assist the childbearing woman with her birth. Our midwifery title in different cultures illustrates the focus or how people may view us. In France we are called sage-femme, which means “wise woman,” while the Danish term is jodmoder meaning “earth-mother.” Midwives practice under a philosophy of care that focuses on the specific needs of women. We empower women to actively participate in their health care and minimize unnecessary intervention while appreciating technology and incorporating it when necessary. It was beautiful to watch the nuns and midwives in this episode as they did just that.

Being pregnant and giving birth are profound events. I had to smile when Jenny entered the room where Julia was kneeling beside the bed and stated, “You’re not sweeping the carpet.” She went to Sister Julienne for some guidance and was told to continue with the upright position if Julia was comfortable. There are several beautifully illustrated texts about childbirth art (see resources below). Within the texts with the examples of artwork the author’s document how culture and customs may vary around the world; however, until recently we gave birth in very similar ways. Artwork has celebrated the power of women and birth throughout the ages. See the link below for beautiful depictions throughout time. One is of the Aztec goddess giving birth to the goddess of agriculture. She looks fierce, and you can see the effort on her face. She is upright and gives birth powerfully on her own. When she traveled through art galleries in North America she was actually placed on her back showing how we felt birth should occur!

But most artwork of varying cultures displays three common elements with human birth that together are termed the "Classic Birth Pose": giving birth in an upright position; human assistance (most commonly other women); and a receiver, the midwife. The woman is the central figure and usually seems powerful and capable.

Being upright and squatting creates more room in the pelvis, makes it is easier to push, and maintains better blood flow and oxygenation to the baby and uterus. Women who are upright experience shorter labor, decreased discomfort with labor, fewer vaginal lacerations or tears.

Sister Julienne was able to put worries for her colleague aside and be present in that very moment with Mr. Masterson. And Jenny was a fantastic coach and midwife/receiver of Julia’s son.

Some things that this show reinforced for me as a clinician and that I will emphasize with the women I serve and with my graduate students:

Here are some interesting links and resources that we have explored in our University of Michigan Nurse Midwifery Professional Issues in Nurse Midwifery course addressing the history of midwifery throughout the ages.

YouTube: Join the Transformation – Maternity Care with a Heart