The Joy of Midwifery Never Dims 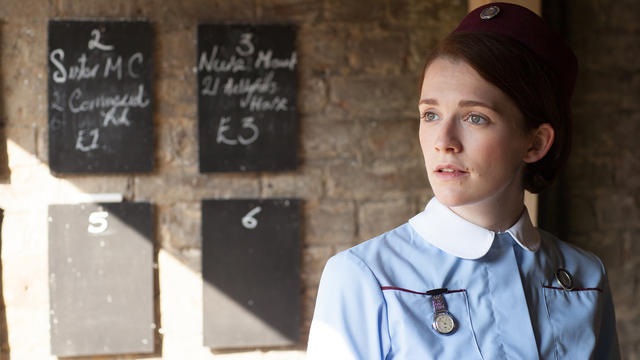 At the beginning of the episode Vanessa Redgrave voices Jennifer Worth’s thoughts about why she could never have chosen a religious life. Many may think the same about the midwifery life. Whether it is a calling to be a nun or a midwife, I believe it takes a certain sort of person to choose the sacrifices and endure the less than pleasant aspects of both endeavors. But despite midwifery’s close dealings with worldly, fleshy devilish things, there is something very spiritually powerful about a laboring woman and the birth of a human being. Whether midwife or nun, one cannot deal daily with miracles without contemplating meaning.

The scenes at the Gypsy camp have stayed with me. I picture the bickering community and police officers stopped and silenced at Sister Mary Cynthia’s command at the steps of the caravan. What was her authority to do that? It was the power of the laboring woman at her side. Later as the first cries of the newborn echo through the camp, the community rejoices. Finally, they quietly and reverently honor the elderly and wise Pegeen as she makes her way to see her great-grandchild then dies. It all becomes a visual essay on the mysterious and inevitable circle of life.

The other thing that sticks with me from this episode is Trixie’s sage advice about wearing poodle skirts. I will always wear mine with a dash of irony from now on. I certainly don’t want to look naïve! Loved the square dancing, blossoming romances and Timothy’s long pants. Thanks for those bits of lightness betwixt the heaviness.

It should come as no surprise that repeated exposure to the human drama and power of birth could inspire poetry. After watching this episode, I found myself rummaging through some old papers to find such a poem I wrote several years ago. Heidi Thomas’ ability to evoke the essence of humanity, women and birth reminded me of it. No matter what spiritual beliefs are held, I challenge anyone not to recognize the power of women and birth. The earth shifts with each arrival. Those who attend birth not only see it, but also feel it. That is the reason that the joy of midwifery never dims. Right, Sister Evangelina? I offer my poem below. It is called “Genesis”.

Every labor is devotion.
Every mother feels its power.
Intense invocation of creation
Through her essence hour by hour.

Every birth room, sanctuary.
Every midwife bends to pray,
Giving homage to each mother
Sacrificing blood this reverent day.

Each birth a new soul enters,
As death bids one to part.
Each spirit surrendered passes,
Forebear to a pristine heart.

For each newborn is a new hope;
Fresh beginning for this earth.
A soul whose unknown journey
May lead all to fair rebirth.