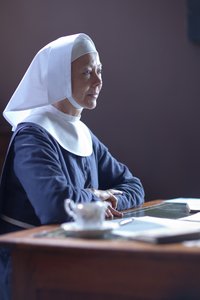 Neal Street Productions After watching the most recent episode of Call the Midwife, I couldn’t help but think about one of the moms I visit through Nurse-Family Partnership (NFP). I first met this young woman, M, at one of her prenatal visits. She was excited to join NFP because she learned that her baby had a birth defect called gastroschisis, which is an opening in the abdominal wall where the intestines can protrude. She was happy to have extra support from a nurse during pregnancy and after the baby was born. M continued getting regular prenatal care and prepared for labor and delivery.

When M was almost 36 weeks pregnant, she called me one morning. She mentioned that her stomach had been hurting since 5 a.m., and it was now 10 a.m. I asked her a few more questions before telling her to get off the phone with me and call her doctor! She headed into the hospital and had a baby boy later that evening. When I visited M the next day, she told me she was just so happy she was able to hold baby E before they took him to the NICU. She had hoped and prayed that she would at least be able to hold him before they had to be separated.

It turned out that baby E had a lot of bowel that was dead from being twisted and not getting blood flow, so he had surgery right away. He ended up needing 2 more surgeries over the next few months, and was in the NICU for over three months. We moved our home visits to E’s temporary “home” in the NICU. While I loved seeing baby E thrive and grow, what I really admired was watching M’s transformation from a nervous, frightened, pregnant 18 year old into an amazing, confident, nurturing mother. Watching her interact with baby E and the nursing staff was amazing. She navigated those cords and monitors of the NICU with ease and visited E every single day, making sure she was there for every bath and was so ready for his first feeding of breast milk. Oh, and on top of spending most of her day at the hospital, she also pumped milk around the clock for him, every two hours. The nurses in the NICU had to tell her to stop bringing in breast milk because she had filled up the deep freezer! She looked into donating some and also kept some at home (and mentioned she might have enough to last E until his first birthday). Can we call her a supermom, or what?!

M and baby E are continuing to do well, and although he’s had a few setbacks and hospitalizations since his initial release, he is growing and getting stronger every day. M continues to be a loving, caring mother, and watching them interact during our visits is amazing. They have such a bond and connection, and I see M is so proud of her baby boy. She has dealt with unkind words from others because she has a baby with special needs, and it breaks my heart to hear that, just like it did on the episode when Ruby’s neighbor made that snarky comment about her baby being outside in his pram.

The resilience that Tish talks about in her post is so true, though. M doesn’t let these unkind words bother her anymore; she showers baby E with love, praise and lots of playtime. I know there are times when she worries about E, or when she is scared when he gets sick. She worries about him being able to walk on time, and when he will be able to eat regular foods, but she always seems to focus on the positives. She tells me every week how much she loves being his mother, and points how his new achievements with pride. I’m so thankful not only for the skilled physicians who followed her pregnancy and continued on with baby E’s care, but I’m grateful that I have been able to be a part of their journey. Even though NFP is a program to help educate and support first-time moms, I feel as though M has taught me valuable lessons about strength, courage and unconditional love.

Andrea Stadnicar (MS, RN, CNM) is a nurse-midwife who graduated in 2012 from the University of Michigan Nurse Midwifery program. Before becoming a midwife, she worked as a nurse in the emergency department and also in labor and delivery. Andrea currently works as a full-scope midwife with the Providence Nurse Midwives part-time.
Read More About Andrea |  Read All Posts by Andrea