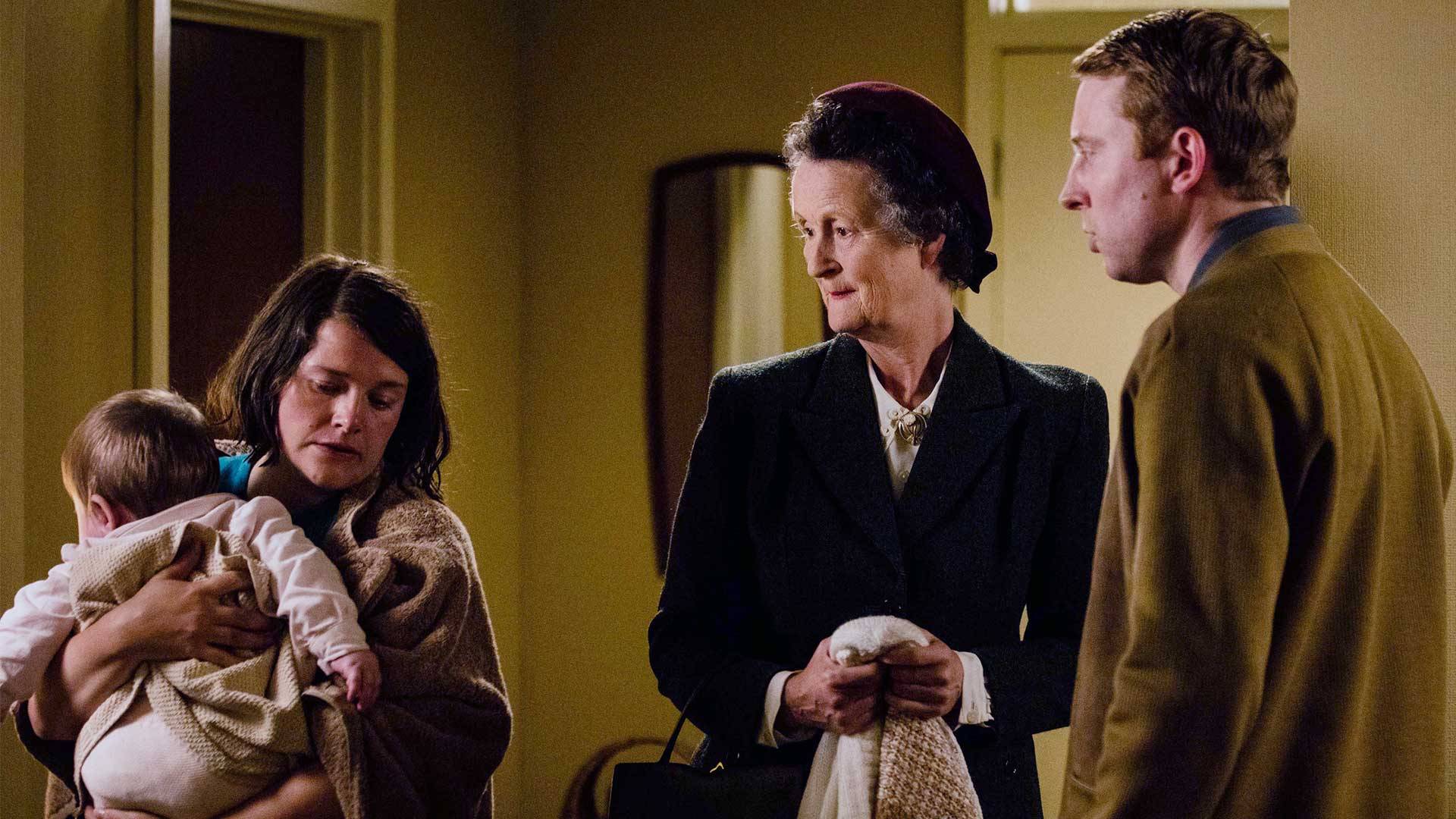 Editor’s Note: The opinions expressed in this blog post are solely those of the author.
Spoiler Alert: This post discusses events in Call the Midwife Season 8 Episode 3.

One of my favorite things about Call the Midwife is that since the very first season, each episode has been able to conjure enough emotion from me that I will probably cry at least once. It could be as simple as watching a birth, and I’m over there, sniffling into my tissues. You might think that sounds silly; who wants to cry every time they watch a show? Since becoming a mother, and working full-time, I don’t always have a lot of time for leisure activities. I don’t just sit around and watch TV. I appreciate that blogging about this show has given me the perfect excuse to sit down and become completely engrossed in the drama, then sit with my feelings afterward and really delve into what emotions have surfaced, and why.

One of the themes running through this week’s episode was grief. We met Hazel Becker, who was experiencing extreme anxiety while raising her little girl, which we later learned was because her first son had died around 8 months old, and his death remained unexplained. We also met Betty Marwick, a mother to now six children, who learned just after birth that her baby boy, Kirk, had a cleft lip and palate. My heart broke for both mothers.

Betty was so overwhelmed with the special care that Kirk needed, on top of caring for her other five children that she even considered placing Kirk for adoption, thinking that he would be better off with another family. She was grieving the life she previously had, and the life she thought she would have with her new baby. She had previously found pregnancy, birth, and raising her children to be effortless, but her experience with baby Kirk was anything but that. Anxiety over feeding Kirk, scheduling his surgeries, and caring for a baby with special needs was overwhelming. She had no support, as her husband was away, working on ships, and she didn’t even know when he was going to be home. She had no other family to lean on for support, and the isolation, anxiety, and grief led to depression.

You may go back to your daily functioning, you may smile and laugh again, and you may talk about your loved one without tears from time to time, but grief changes you, and is always there.

Hazel’s anxiety stemmed from the unresolved grief from the sudden loss of her first son when he was 8 months old. Actually, let me back up a little. “Unresolved grief” is probably a bit of a misnomer. I don’t think grief is ever resolved. Grief leaves its mark on one’s soul forever. You may go back to your daily functioning, you may smile and laugh again, and you may talk about your loved one without tears from time to time, but grief changes you, and is always there.

I so badly wanted to wrap Hazel in my arms, and tell her that I was so sorry for what happened to her. I wanted to tell her to talk about Stephen, her son, and to talk about him as often as she wanted or needed to. I was devastated to hear that she was told to keep everything to herself, to not discuss him. Stephen was her son. He was loved and cared for. He existed. If there is one thing I hear over and over again from bereaved parents, it’s that the great majority of the time, they want their baby, and their baby’s life, to be acknowledged. It is so much harder to bury grief deep inside, until you feel like you might burst, than to let it out along with the flood of emotions that may come with it.

I’ve never lost a child. I’ve lost grandparents, and although that can be extremely difficult, it is something one expects to happen in life. I did lose one of my best friends, Don, unexpectedly in 2009. However, my reaction to Hazel’s admission that she was not a first time mother, and realizing that she had lost a child, evoked a visceral response in me. I was sobbing. I actually watched this episode while walking on my treadmill, and I had to stop and get off, and catch my breath through the tears. Losing a child is one of my greatest fears. Although I have grieved hard over the years since losing Don, the grief was renewed, almost feeling fresh, once I had my own children and would try to put myself in his mother’s place. The first time I ran into Don’s mom after having my son, Benji, I cried on an off that entire evening. I told my husband that having a child of my own now, I could not imagine how his mother was surviving, having lost her son.

One thing I do have is postpartum anxiety. It was there after my first son, but I think I denied that it was that bad. I never thought of myself as having postpartum depression, that’s for sure. Then came my second son. I was definitely anxious, sometimes having a hard time going to sleep at night when the baby was sleeping, thinking of all the possible things that could happen (Burglars! Fires! Car accidents!) and no matter how unlikely my rational brain knew that these things were, I couldn’t stop obsessing about it.

My postpartum anxiety ramped up when I went back to work. It got to the point that I was crying every time I had to leave for work. I even cried at work, sometimes while pumping and missing my baby. I reached out to one of my colleagues, Sara, because I knew this wasn’t okay. Sara Mertz, CNM, runs the POST clinic at Henry Ford West Bloomfield Hospital, which stands for Perinatal Outreach and Support Team. It’s a clinic for people with perinatal mood disorders. Sara listened to everything I had been going through, offered support, and helped me come up with a plan. I started therapy and medication. After about two months, I felt like myself again.

I weaned off of my antidepressant when Theo, my younger son, was about a year old. Most of the time, I think I’m fine, but I do have periods of increased anxiety. Theo is really cutting back on nursing, where he maybe nurses once or twice a week at bedtime. No one ever talks about the hormones with weaning, but they can be almost as big of a doozy as birth itself! Hazel’s fear about something happening to her daughter Dawn brought out a lot of my own fears about something disastrous happening to one of my own children.

Maybe you’re thinking, wow, why would you keep watching Call the Midwife if it’s bringing out anxiety and making you cry every week? The thing is, I love how real it is.

I appreciated the emotional release that came after watching this episode. I had a good cry, feeling sad for Hazel and Betty and everything they had been through and were going through. I had a good cry for myself, for often feeling overwhelmed between being a mother and a partner and a midwife and every other “hat” I wear on a daily basis. I let myself feel my anxiety, acknowledge it, process it, and let it go. I’m not sure how long these bouts of anxiety will stick with me, but I am glad to have family, friends, and professionals to lean on for support. I’m glad to have the tools to work through it.

Maybe you’re thinking, wow, why would you keep watching Call the Midwife if it’s bringing out anxiety and making you cry every week? The thing is, I love how real it is. It helps to remember that while the times change, womxn and mothers have gone through so many of the same experiences. This show also reminds me on a regular basis how much I love my profession and how important this work is. So on that note, I’ll see you at the same time next week, and I’ll bring the tissues.