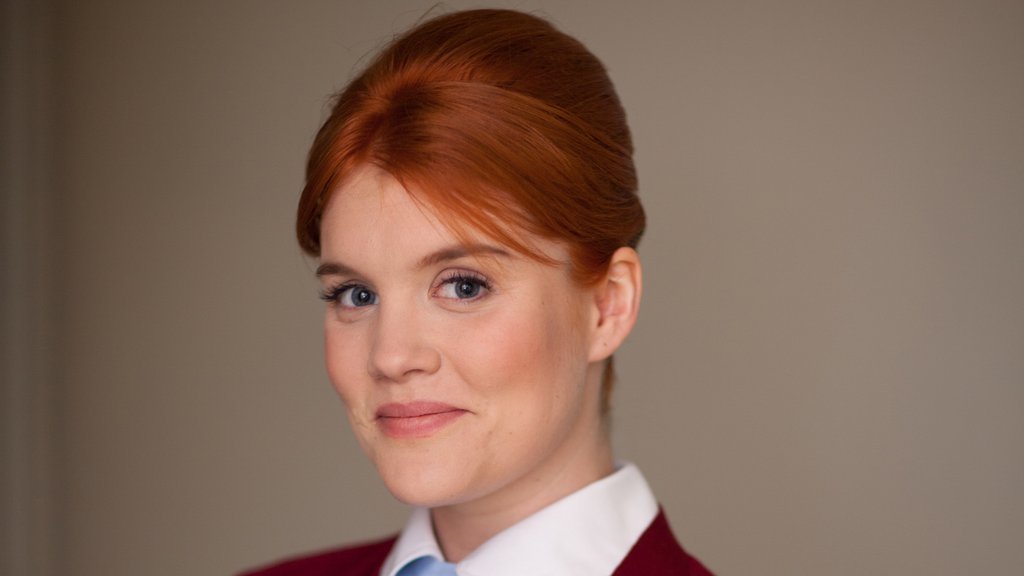 Patsy is mid twenties, tall, elegant and favours slightly tailored clothes. She joins Nonnatus House to help cover the work load in Jenny's absence. Patsy has boundless energy, and is prodigiously strong, never blinking in the face of hard work or physical privation. Her robust common sense and frank manner prove rather a tonic at a time when Nonnatus House is feeling overworked.

However, despite her no-nonsense approach she is slightly more guarded than she first appears, and is not entirely easy to get to know. Patsy and Trixie become roommates and enjoy many a late night drink and a cigarette.

It's a show which really shows the staggering bravery and strength of women, whether they're delivering babies in impossible circumstances, or trying to keep food on the table for their families. It's a show which draws on the universal themes of love, hope, friendship, as well as heartbreak and loss: all of life is in Call the Midwife.

The music is tremendous, and Patsy has some stylish new 60s trousers. You can feel the modern world creeping in bit by bit.

I'd give it a go in a moment of mad confidence and then instantly regret it once I realised I hadn't a clue what I was doing.

What was it like when you joined the show?

I was definitely welcomed into the bosom of Call the Midwife! I was incredibly nervous before I arrived. It’s a bit like the first day of school when you’re the new kid and everyone knows each other. They’re already friends and you wonder if anyone is going to sit with you at lunch! So I was kind of terrified and then, of course, I arrived and everyone was just so nice and incredibly supportive.

Were you a fan of the show before joining?

I was a huge fan of the show beforehand. There are certain things that are very iconic with Call the Midwife like the bicycles and the maroon hats and the moment you start putting those on you feel completely different. The first time I sat around the table with Pam and Judy having cake, like the scenes I’d watched for two series before that, I had to pinch myself and hope no-one noticed that I was freaking out! Then I had to eat about 36 pork pies because I didn’t understand about continuity, which was quite bad.

Why do you think the show is so popular?

The writing is incredibly good - all of the scriptwriters are amazing but particularly Heidi who oversees the whole thing. Everyone on the crew is incredible; the set designers and the make-up and the acting ... not speaking for myself but for everyone else! I also think it’s a show about women who work and who are completely competent. So often on television women are secondary or tertiary characters - they are someone’s wife or someone’s girlfriend. It’s proof that there is a huge appetite for shows starring strong, powerful, independent ladies. Lots of men love the show too and rightly so because it’s about the human experience and not just women.

There are a lot of women on this show and it is quite an intimidating bunch - a bit like a girls’ boarding school where we just talk a thousand miles a minute and there’s a lot of giggling. I think when the regular male cast come in they are a bit terrified and they should be terrified!

How did you prepare for your first birth scene?

The process of the births is a very tightly choreographed set up. I had to practice with the clamps for hours in front of the TV because they are quite complicated to use and you don’t want them pinging off into someone’s eye. Terri, our consultant midwife, will always be there to make sure everything looks right and she really talks you through it. I feel, possibly delusional, that I could deliver a baby in real life. Although of course it would happen and I would have no idea what I was doing and I would be a danger to society!

My first birth was terrifying and it was quite a complicated one because the mother had to give birth on the floor of her sitting room. The new-borns are babies under 14 days old so they are incredibly tiny and we have to cover them in grape seed oil in order to make it look like they’ve just been given birth to. That obviously makes them incredibly slippery! I thought it would end in a terrible disaster but luckily Terri was there to make sure everything went smoothly. It is nerve-wracking because you feel an enormous responsibility and on this show, the births are so realistic because Terri is there consulting all the time. They are so realistic that my mother thought we actually delivered real babies from real pregnant mothers! It was completely mad but when you watch them it really does look super real.

Which character besides your own would you most like to play?

If I wasn’t playing Patsy, I’d like to play Trixie – she is so much fun and her clothes are sublime. But then, Sister Evangelina is amazing as well, she’s such a ballbreaker! Either one of those two! Or Sister Monica Joan because she gets to eat all the cake.

Would you like to have lived in that era?

Possibly for the clothes, the music and hats but I’d miss the telly and internet and it wouldn’t have been a good idea for me to marry someone I didn’t like that much aged 18…..

The clothes are absolutely amazing in the series.  I think Patsy was the first midwife to ever wear jeans, which is quite controversial. She’s not quite mod-ish but the mood boards that we pulled were sort of Bridgette Bardot, Breton tops, Capri pants and little dresses. The costumes are sublime, I love them! Coming to work and dressing up every day is the best.

The music of the era is the best music out there isn’t it? We’ve got some amazing music in this series and now we’re in 1960 we are edging towards rock and roll. I hope in the future we’ll have The Stones, The Beatles and Bob Dylan! I’ve always been a huge fan of 60s music and I was brought up on it. The music is chosen very specifically by Heidi and I think it sets the emotional tone and adds a lot of poignancy. We have a lot of dancing scenes in this series so suddenly you can feel the new era dawning and the music is almost the first thing that starts changing.

Show us your posts with your paper doll on social media by using #MidwifePBS!

Download Doll
Season 5 | The Impact of the Show
The cast talks about what makes them most proud of Call the Midwife's social impact.