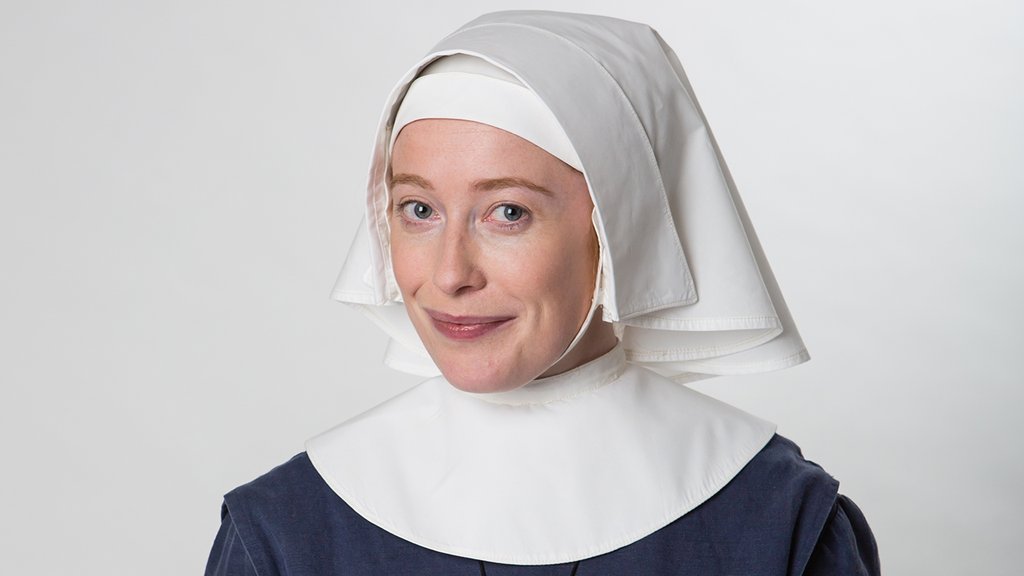 Sister Winifred joined Nonnatus House after taking her vows at the Mother House. A warm-hearted, slightly innocent young woman, she has lived most of her life in the countryside. She has only recently qualified as a nurse and a midwife and is still to find her feet. She has mainly practiced in a small cottage hospital in a rural town and is shocked by the deprivation that greets her in the East End.

Her grittiest work to date has been a stint as a Department of Education Head inspector (nit nurse).

After being at Nonnatus House for over a year, Sister Winifred grows in confidence and has become a trusted member of the community.

Tell us about the scripts.

A lot about Heidi’s writing I really like is that it’s teaching you and teaching people who weren’t there. Lots of young teenagers who watch it don’t know about the struggle for women’s rights and the Pill, and all these different things we take for granted. She’s created something incredibly special, new and brave, it’s all centered on female stories which, nothing else is, it’s a seminal piece of television.

What do you think about entering the Sixties?

You really start to see the changing nature of Poplar, for example, you’ve got lots of different immigrants coming in and lots of our stories are about that. I think it’s really good to remember that in the 1960s it wasn’t like how people think it was. I think we’re doing a really good thing with bringing that to attention, that we still have the same problems with racism and people not being as tolerant as they should be. I think we can all suffer from Golden Age Syndrome – you know, oh it wasn’t like that then, and it was. I’m really enjoying being part of showing that.

In what way has your character grown and developed since you started?

Sister Winifred starts off not enjoying the midwifery part, and she’s pretty fearful, not got that much self-esteem, low on confidence, she’s got that kind of nervous energy about her and we see her trying to work out where she fits.  Throughout we really see Sister Winifred growing up in front of your eyes. You’re seeing her growing pains trying to work out what she believes in, who she is, her hierarchy, her status and changing. I feel like I’ve tried to show change in her. Her seeing suffering, losing her naivety and trying to stand up for herself more about what she believes. You see it much more this series where she loses her temper a bit and starts to find a voice and say no, this is what I think.

Why do you think Call the Midwife is so successful?

Heidi Thomas and the producers are so good at being educational and showing something that is heart-warming and lovely to watch on a Sunday while also bringing up very important issues. I was sat at a read-through and was really overwhelmed with emotion because of the gravity of the situation. You can be laughing the whole way through it and suddenly realise there are very important messages in there. That is the great achievement ofCall the Midwife.

Have you had any interesting fan encounters you can share?

I didn’t think people would recognise me because of the wimple but, when they do, they are so joyous and grateful because they love the show. It fills me with a real sense of joy and gratitude that we’ve been able to create this world, with all these other amazing actors, crew and writers. I’m proud to be in something so great.

What are the differences between then and now?

Looking back at that period there’s an incredible sense of community. It really feels that people looked out for each other. The midwives comforted people on so many levels - medically but also as a social worker and a friend. It seemed to be a place where you could knock on the door and ask for help rather than feel isolated. I think we’ve lost that sense of community because we’re scared.

What do you hope the audience will take away after watching this series?

Being part of the show really reminds you why the NHS started. I know we bemoan it and there are things that are wrong but we can’t lose it. It’s a real credit to the welfare state. I hope that people who watch the show see all these impoverished people being helped. We live in a society that should help those people.

I really love the soundtrack music because of its bright quality and it really puts you into that world. I suppose now it’s synonymous with Call the Midwife. I also like the hymns in the show. Because I’m a nun, that part of your life is important and I think they are really serene and blissful. It’s not something you hear very often but I like how they always have it in every episode. I think it’s a chance for people to have some serenity on a Sunday evening. I am looking forward to more 60s music as it goes on because that’s an era I’m really into as Victoria. I know from my parents that they adore hearing that music because it reminds them of their childhood. It has a big sentimental factor for people of my parents’ age and the music takes them back. It’s used very well comically too. It’ll be interesting to see how the music changes and reflects the time we’re going into.

What do you think of the costumes on the show?

There is a big part of me that is really jealous I don’t get to wear any of the incredible clothes, especially Trixie’s. I’m massively into vintage and I wear lots of the kinds of clothes that feature in the show. Our designer is so brilliant that every time Trixie comes out I wonder how he did it. There’s this amazing dress Trixie wore last year, which I loved. A burgundy red, tight tulip shape dress and bodice with a black criss-cross pattern that is just so feminine. That’s something I think we’re missing now. It’s sexy in a very feminine way. I just adore sitting back and watching what the girls are going to come out with.  Especially Patsy - I usually think she’s in her own clothes because we emulate that so much now: the high-waisted jeans, with a little checked shirt and espadrilles. Maybe one day I’ll get out of the habit!

No, I couldn’t deliver a baby. If you were on a bus and somebody was having a baby you’d go through the motions I suppose, you’d just sort of say some of your dialogue and hopefully it would be the right thing to say.

If you had to play somebody else’s part, who would you be and why?

Trixie, because she gets to wear all the best clothes.